Good things must come to an end, because part of the good thing is the nostalgia—or if born with a greater panel of sensibilities, the saudade—that one must live off it.

Our life on the Plaza Mayor is coming to an end.

This is the last entry to our Blog's Felipe III 6, 6B.

We will take advantage of this final entry to bring the various ones that were never published, for lack of time, from their purgatory into tiny paragraphs. They don't constitute fully self-contained posts, and part of them is about why they never saw the light of day in the first place. Wouldn't it be for us leaving tomorrow, they might have never escaped the list of "unpublished material", maybe providing another reason why it's good to keep moving, even from good places.

The best azotea in Madrid is ours, in Mayorcita. Then there is the one diagonally opposed, which you can read about here.

I wanted to compile those of interest along with other viewpoints, rooftops, terraces, etc., affording fantastic views of Madrid, along with other links which cover the same question, such as this one. We spent wisely most of the time at our place and limited our excursions to the Palacio de Cibeles and the Gourmet Gran Vía. We tried the famous Bellas Artes, only once, and there was a long queue. This is a project we might be taking up later on, since you don't need to live by one azotea to visit the others, and we are now extremely familiar with Madrid's skyline, though from one particular angle, and it's always nice to see geometry takes its stand.

I would have loved to write about the main landmarks of Madrid that we have visited during this year leaving in its center, particularly those we see from Mayorcita, but not exclusively, such as the Templo de Debod, the ancient Egyptian temple with its adorable pylons to look like the temple of Dakka. Built originally 15 kilometres south of Aswan in the early 2nd century BC by Adikhalamani, the Kushite king of Meroë, it ended up in Madrid not as a result of looting, but as a gift. It's a great place relocated in another great place as a result of a great international collaboration. It is a piece of civilization that traveled space and time to delight the heart and the soul.

The saddest omission from my blog will be the Santa Cruz, which has been a recurrent image this last year and of which I almost took a picture a day, so great is its simple and yet powerful landscape in the skyline of the Austrias. I would have liked to tell you as well about the Palacio Real, the Gran Vía, the Plaza de España that has a great sculpture of Indians and conquistadors, about the Puerta del Sol, the Thyssen museum and others we still have to visit (de los Americas, de Madrid...), and more about El Retiro, Cibeles, the Almudena and of course, the Plaza Mayor. 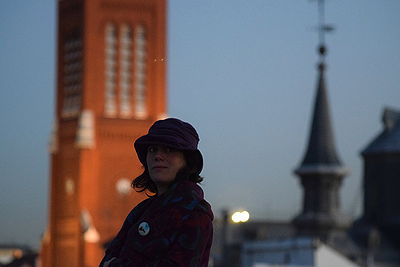 One of my most bitter non-fulfilment in this blog was about the swallows of the Plaza Mayor.

hirondelle) is the most noble of the little birds. The Alpine cousin has been documented to fly for over 200 hours [1]. It inhabits the same buildings as the humans and is the personal friend of every little child. It was one of the wonders of my childhood.

Swallows on the Plaza Mayor are wonders for everybody at any's age, especially if you can survey their flight from their own altitude, or above. Not only swallows, but migratory birds in general, including cigüeñas, make outstanding patterns over the Madrid de los Austrias. I intended to make movies, in slow-motion, pictures, drawing, recording of all sorts and types. But they were too fast, too clever, too magical for me.

If there is a Goliardic place, this is the Plaza Mayor of Madrid, with the Casa de la Panaderia's facade adorned with mythological characters and others just straight invented. I had planned to study it at depth but was foiled by the reforms of the facade that covered it hideously. This will be on another occasion. At any rate, this remains the theoretical perfect visual background for the Songs from Beuern. The notion seems so obvious that it actually happened. Juanjo Mena directed a live concert of the Carmina Burana on the Plaza Mayor [2]. I let the camcorder run and uploaded Tanz, not only because it's one of my favorite piece, but foremost because it best illustrates the impressive contrast between the noise eructed by the crowd and the perfection of the fourth art, the two dominating each others in turns.

It is difficult to make a good recording. Always there is someone sneezing, chatting, jabbering, babbling, yackety-yaking. Even when giving typography samples, Knuth illustrates $\mathrm{\TeX}$ syntax with an example that reads "please cough between movements". When the audience is one so diverse as that of the Plaza Mayor, particularly profuse with tourists, idle or, on the contrary, excited people, the cocktail it forms with an orchestra becomes a bitter but savory one. It is illustrated here for instance by José Navarro. I got a similar impression, but from the rooftop, where are reverberated all sounds and songs, both noble and vulgar, in the resonance box that is naturally formed by the enclosing walls. Mainly because I was frustrated in my attempt to collate images from the facades, I had to cancel this project of editing at least the O Fortuna, and will have to come back to it when they remove the scaffolding. Hopefully, the fresco should still be there!

I have made many timelapses of the Plaza Mayor. Only a few of them have emerged on the web (some remained in the deep web and most on my local files). The last one is in fact being captured right now (at this point I'm taking a couple of minutes off to check it's still recording all right—it's 19:38 and you'll be able to see what I went to check). It has been running since yesterday, as this is my last go at realizing a full-day timelapsing of the Plaza Mayor. I somehow lost interest, or at least a sense of priority, since my first attempt with the 17 hours in the life of a Plaza Mayor has been outpaced by Marco Valdés Díaz who made a great such timelapse shortly after (see also here) and even, almost immediately, an impressive and heroic 3 days timelapse. He used a GoPro and though I don't know the difficulty for him, I can only guess from the rapidity with which he tripled his recording time, that it was essentially straightforward. I really hope that he's working on the "full one-year version", to get a bit of a challenge and for realizing another outstanding work! Maybe he just got tired, however, or bored or lost interest as well (he has only few views on YouTube, 45 at the time of writing, for something that I regard as a jewel of the art!) 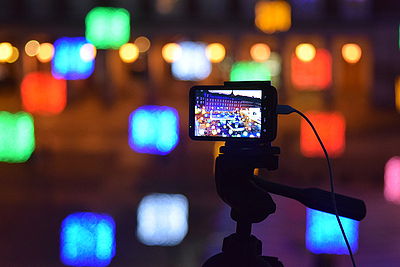 For me, ill-equipped with obsolete equipment, I had to struggle with batteries and storage capacity in addition of issues with wind and bad weather. What I aimed to achieve, since our first try, that suffered from many shortcomings, is something like that. I have explained elsewhere why such timelapses, hardly speeding it up, are great, revealing dozens of things you wouldn't see otherwise, such as, in this case:

And more... I paid exaggerated attention since William finally arrived at 12m19s. The costumed characters are also worth following, in this video near the end, starting from 21m13s.

My series "The Little People" was accompanied by the music of Paco de Lucía, because to me, his art is what most characterizes Spain, its spirit, its people, its character, its charm and its mystery. Therefore, in taking a God's glimpse at the life of the heart of Spain, it didn't appear out of place to accompany the staccato of life with that of Flamenco. I used Zyriab for the 17 hours timelapse, in tribute to this exceptional piece. Little could I imagine, even though I'm not surprised a posteriori, that the crass © industry would take umbrage of my 150 or so views, and would not only block the video in some countries for a lot of time, but also eventually ban it completely. You can listen to Zyriab any place on the internet, if not at the link I just provided above because it too got banned, then somewhere else. Anyway, what I did, obviously, is to substitute for another song, free from stinking © claims. For all I care, this or another song makes hardly a difference to the subject matter. It seems a pithy, however, that a tribute to Lucía has been vomited upon in this pecuniary way (it took many hours, possibly days, to assemble the timelapse; a few minutes to add the music or replace it). For these people, UMG and company, who only see juicy money everywhere, there's no value in the pictures of the Plaza Mayor itself, in the dynamics of its people over the course of a full day. There's only their algorithm catching a possible © infringement (there's none, clearly) and trying to blindly secure, regardless of the waste, a few more bucks.

Taking advantage of their short-mindedness, we decided to make it even more interesting and original by providing our own musical background as well, which we can do since Elena is a gifted singer (funnily, maybe because she sings so well, this video has been marked as "matched third party content" as well; maybe we have to compose as well! Or, like in Germany, you are assumed guilty by default). This had the effect, however, to slow us down in our releases, since recording a song is a slow process as well. We still have, however, great timelapses of raining Madrid, cloudy Madrid, busy Madrid and a load of additional Little People material, so look us up!

How fitting that we will be closing this blog with one of the most famous and delightful Spanish tradition (also celebrated in countries within the cultural Spanish sphere of influence): the uvas. This is also the one we started our life in Madrid with, on the rooftop. It consists in eating one piece of grape with each gong of the Puerta del Sol, as a sign of good luck. The pictures below are taken one year apart, they are the $\alpha$ and the $\omega$ of a wonderful year in Madrid (the pictures will appear when the second one will have been taken, which, at the time of writing, still belongs to the future!)

With this, it only remains for us to wish a great New Year 2015!