It's been over one year now that we lived in the Plaza Mayor, and this is getting to an end. One of the first things we did last year was to buy the traditional lottery ticket. We did this year too, but this time from the Puerta del Sol.

And this year we'll write about it since, not doing it last year because we thought it was futile, we met with great deception the state of our memories reduced to a few and uncertain shadowy memories. One always write for oneself, and possibly for a few curious, eccentrics and the occasional wackadoo infatuated with somebody else with whom they believe their inner soul resonate in a strange way.

We get the lottery every year since we're in Spain (we don't play lottery otherwise). It is, to start with, arguably the most famous lottery in the world. It is a traditional event replete with adorable anecdotes, such as the children of San Ildefonso singing the numbers, the multitude of prizes or the association with Christmas (navidad) with beautifully adorned lottery tickets. The most beautiful aspect, however, is the sharing. Although it is the biggest lottery in the world in terms of the amount of money that is distributed, pleasingly, the lucky people don't get vomintingly rich since instead of a black swan type of strike, the Spanish lottery graces multiple people with more reasonable amounts (in the magnitude of several hundred thousand euros (?!), enough to help you buy a small flat in Madrid, not enough to turn billionaire overnight and get a villa in Marbella).

What people usually do is get a ticket, and exchange part of it for other shares with family and friends, so that if someone wins the lottery, everybody gets a part of it. It became so widespread, you can buy such fractions of lottery at the bar, at the post, at the hairdresser, at most places you go with regularity. The work place typically would get one full number and let all employees get a part of it.

This is an explosive combination, because you get stories verging on the miraculous such as the one of Sodeto, where a small village of poor farmers from some "Rural Development and Colonization" program to repopulate infertile and arid areas of Spain all became rich on the eve of Christmas. To make the fairy tale complete, everybody in the village won... except one! [1][2]. Also, apparently, people didn't turn out so much better in the long run, illustrating again how we, human beings, are in an eternal pursuit of the futile, the glimmering and the false pleasures that will be the cause of our perdition. The only one who wasn't among the recipients turned out to be a cinema director who, instead of getting bitter, made a film out of it, Cuando Tocó

, soon to be released. He might have been the most fortunate after all and the one making the best out of this twist of fate.

These are our numbers for 2014 below. The first one is our most cherished as it is our number for this year, over which we retain the bulk of its value. We got it in Sol and shared with Elena's parents for 9€ (11€ left for us). The second ticket, we got in Cantoblanco for the polaflow group, with 6€ for us (3€ each), 5€ for Camilo and Juan Pablo and 4€ for David who wanted to put as little money as possible since he regards lottery as a scam. From all these quantities, we all gave 5% of our respective input so that Blanca, not currently in Madrid, would still play for 1€ of her own in our luck. The two last tickets are contributions we got at the mail office of Cantoblanco, paying 3€ to play for 2.5€. We kept 2€ for each and exchanged 50 cents with Elena's parents. 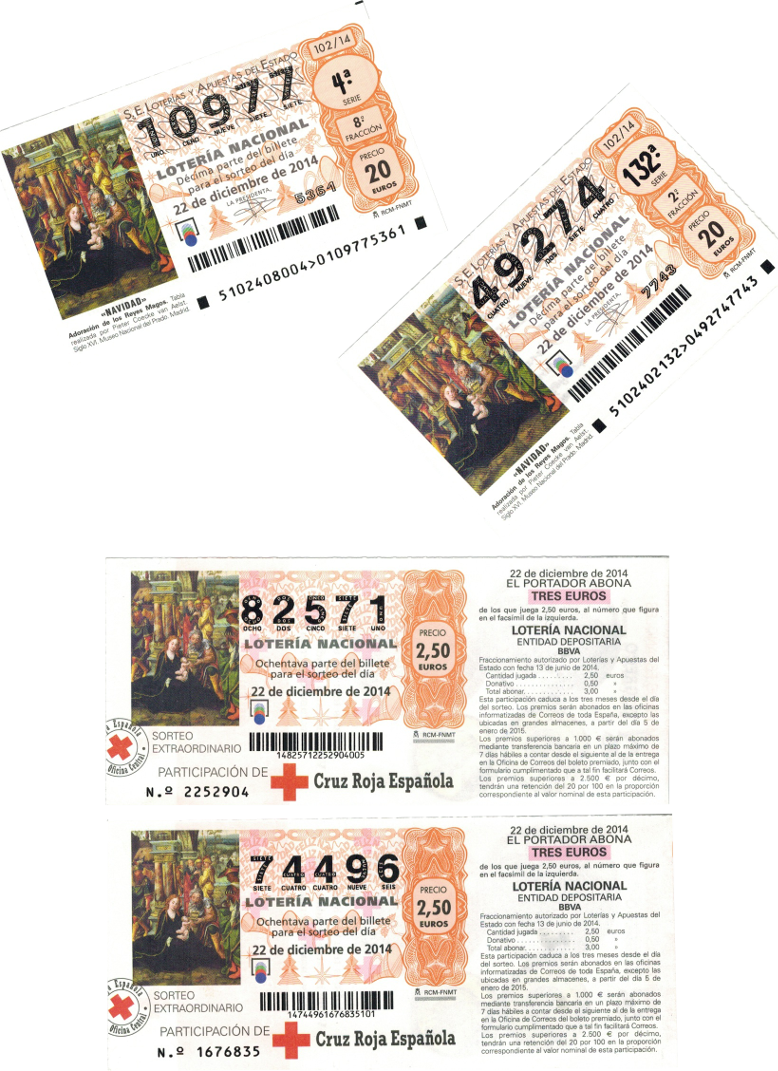 Exchanging our own numbers, therefore, we also get hold of additional numbers that in total make us bet:

One we actually got to pay because it was "understood" a posteriori that we'd contribute cash instead of numbers (this was still before the sorteo, so that's fine :) and we didn't have more numbers to trade anyway). For these numbers, we don't have the ticket. What Spanish people do, instead, is a signed paper. That's the copy we got: 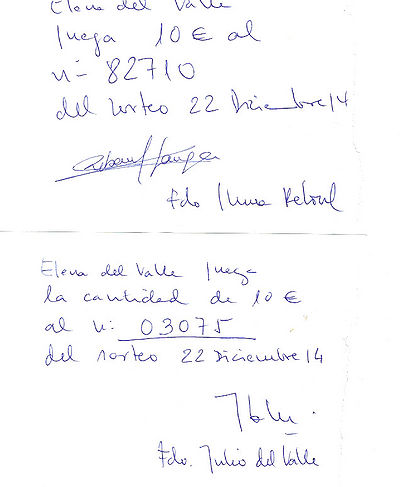 Chances are outstanding to win something (for a lottery). It's as huge as a thick 14% to get something (at least what you put in on a given number, or some money, tax-free up to 2 500€). There are 100 000 balls (you can hunt for the number you saw in your dreams) and only one winning the main prize, el gordo. That makes a 0.006% chance for us this year to collect the main prize.

To give a magnitude to this number, with 15 out of the 4 674 229 articles on the English Wikipedia at the time of writing, I have started 0.00032% of its pages and this makes me 20 times more likely to win the big lottery than to find by chance a page that I created (you can try my luck).