A mass was celebrated today (9 November (2014)) in the Plaza Mayor of Madrid, in honor to the patrona de la ciudad, the Virgin of the Almudena. These are some pictures of the event.

The choirs were splendid. The general acoustic was interesting as it was mixing the holy with the folkloric, with castañas of Chulapos who, strangely, left before the end of the mass and started celebrating. All this happened below the cubes of lights for the Christmas effect, hanging over the crowd as if magically.

There was a boring discourse by Ana Botella smelling strong of political hypocrisy. As soon as she could go off, she had someone bring her a cigarette and light it as if at a train station, lowering her head as she had done a minute earlier to kiss the hand of the bishop, and now blowing on her tobacco which she smoked vulgarly as if in a bar, without even waiting for her or the Virgin's exit of the Plaza. Then, walking clumsily with her high heels, she left by the puerta de Gerona in the small company of a few people, none apparently from the police, which surprised me in the light of her previous public appearence. It seems that her truly hostile public does not attend this sort of traditional events. Or maybe they respected it. Or more likely, were not aware or couldn't care less.

One added advantage of being on the roof is that you can contemplate the neighbors contemplating the event as well. Here are some of the birds we could snap. 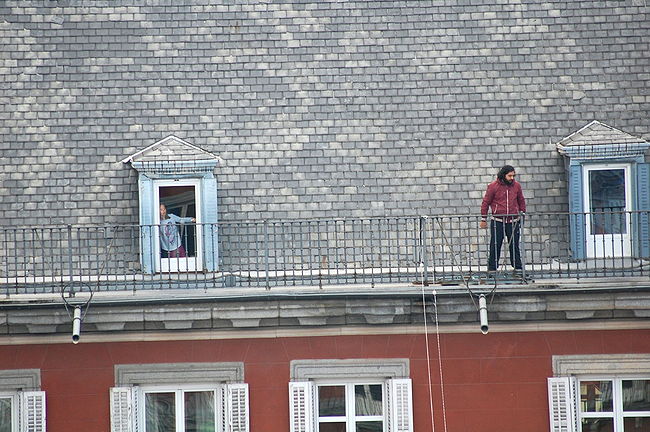 We are not sure how many of the windows have people living behind. It's not often that we see them getting out, to enjoy the view. When there is a big event, it is more easy to catch them.