The Weißwurst is the signature dish of Bavaria, originally Munich but now thought to be even better and more traditionally nurtured in the surrounding area (below the Weißwurstäquator that separates those Germans who live by this etiquette from those who don't. It normally is a breakfast meal to be enjoyed with pretzels, sweet-mustard (Süßer Senf) and white beer (Weissbier). This is due to their fresh composition, without smoking or any preserving elements, and the folklore habit that weißwurste should never hear the noon chime of the church bells. Another interesting fact is that it should be eaten by sucking the meat out of its socket (or socket), a procedure for which German has its own verb: zuzeln. 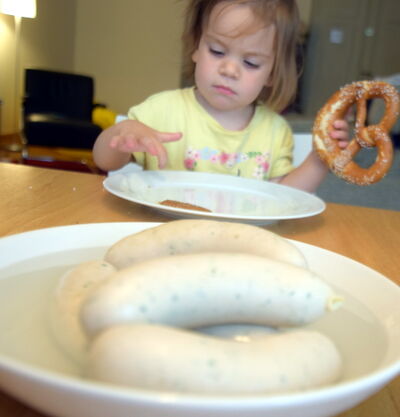 Consisting of minced veal, they were accidentally discovered (by Sepp Moser in 1857) who, on Fasching Sunday, ran out of the usual skin to make sausages. Using a thinner skin (apparently, lamb bladder), he boiled them instead of frying or cooking for fear of bursting them open. That led to the discovery of what is now Bavaria's iconic meal.

Simmer (hot but not boiling water) for 10-20 minutes. Serve in a pot with hot water (with Brezen, mustard and, in ideal cases, Weissbier).