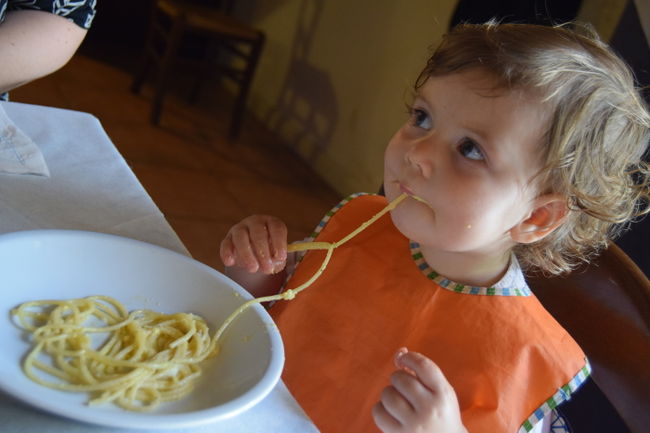 Pasta is one highlight of Italian cuisine.

First referred to in Sicily in 1154, it became a staple food in a variety of occidental countries. Despite its common and basic appearance, this is a full universe of its own, starting with the breathtaking variety of different pasta. You probably know about the fusili, the spaghetti (and it does not take much of an expert to distinguish that from the spaghettini), the fettuccine, the tagliatelle (and taglierini), the cannelloni, the macaroni, the penne, the rigatoni, the ravioli or the torteloni and others equally famous. But do you know about the avatelli, the campanelle, the capunti, the casarecce, the gigli, the strozzapreti, the grattoni, the orzo (or risoni) or the passatelli?

The Gnocchi (plural of gnocco) is pasta with potato. The art of gnocchi is in the sauce which accompanies them, they are otherwise fairly simple to do. An interesting variation for its ungastronomical name is la merda dé can.

Cook potatoes (1kg) in water (not peeled, as for a mash). Then, precisely, turn into a mash. Add butter (50g) in cubes. In the mixer, mix an egg+a yolk, muscade and flour (400g). Roll and cut into little gnocchi, plunge in boiling water, remove when surfacing and finish in a frying pan, covering with a sauce of choice.