Our work with Eduardo Zubizarreta Casalengua and Camilo Lòpez Carreño on Conventional and Unconventional Photon Statistics made the cover of Laser & Photonics Reviews (my second cover since PRL's macroscopic condensates). This consecrates Elena and Eduardo's efforts after their key insights made years ago but which we struggled first to write down in a condensed form and then, even more, to publish, which I regard as one confirmation that we understood something very fundamental, very broad, very important and very beautiful. The artwork, which is very Christic, is from Carlos Sánchez Muñoz and represents the basic idea of the paper, which is explained in this blog post, although it is hoped to be self-explanatory for those familiar with the field. It is also simple enough so that there is something for everybody to understand about it.

The idea in its simplest form goes as follows: if you mix a coherent laser beam (the red, solid beam coming from the right) with the output from a quantum source (depicted by Carlos as a glowing slab of something, presumably a quantum well, bathed in the confined blueish radiation of a pillar cavity), you can get, on one arm of a beam-splitter (the cube, that introduces the two fields to each other) a much more "quantum" signal. That is, the fuzzy little balls—photons—plucked in some sort of jelly which is the coherent, i.e., classical part of the signal (a fainter version of the other bright laser beams), get stripped free from this background and emerge from the beam-splitter as pure, single, naked photons, the "quantum juice" in all its glory: the pure quantum light. On the other arm of the beam-splitter, you get an even soaker version of photons stuck in a thicker coherent marmalade. The scheme is a sort of quantum-cleanser: it removes the classical part, and this is what the sketch aims to show (?!). 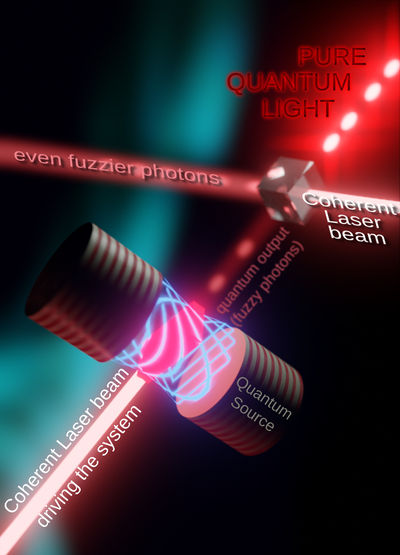 There is more to it than the sketch also tries to convey. In particular, and counter-intuitively, the photons bathed in the background radiation from a typical output of a quantum source, happen to be bunched, i.e., cluttered together. I say counter-intuitively since it should indeed seem weird at first that

The latter is the famous interference from optics, well-known since Young and that ceases to surprise after the 19th century, or high school, at the latest. The former is its two-photon counterpart. In both cases, you need of course to chose right the phase between the two fields, so that, at the one-photon (wave) level, the antinodes are opposite, and, at the two-photon level, the amplitudes of the two-photon component of each field are also opposite. In fact just as you can produce destructive and constructive interferences in classical outputs, in this way, merely varying the phase, you can suppress or enhance the two-photon contribution, resulting in antibunching or superbunching. This is no more than multiphoton interferences of probability amplitudes. The figure below shows what happens when adding an out-of-phase coherent field to the output of a two-level system (2LS) that is coherently driven (so-called Rayleigh regime or Heitler regime): 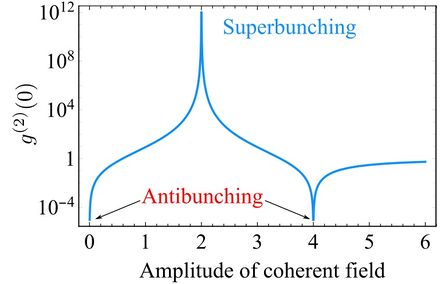 When the amplitude is zero, meaning you're not adding anything, you get the antibunching of the two-level system itself. As you increase the amplitude, you spoil that, and swapping over, you find two resonances: the constructive two-photon interference, superbunching, and the destructive two-photon interference, antibunching. Here you have the "paradox" in its reversed form: add uncorrelated light to antibunched—separated—photons, and it'll come up as bunched.

Why is this simple effect, this basic idea, which you'd imagine is known since forever, is actually important? Because it's basically everywhere you care to look at in the output of coherently driven systems in their weak-excitation limit. Why? Because you don't have to do this interference yourself. The system does it automatically, internally, and that explains a lot of what quantum emitters do, clarifying at once a huge disparate body of photon statistics that have resulted in scores of hundreds of papers looking at particular cases of that, explained in a great variety of ways, from vague, to poetic, or mistaken, or unclear, or not-even-wrong, or not explained at all.

And there is some physics involved too. The two antibunching peaks of the above picture, for instance, behave very differently if you look at other photon-numbers, i.e., at the three-photon, four-photon, etc., statistics. This led us to a classification of conventional and unconventional photon statistics, named after a popular terminology of conventional and unconventional photon blockade (you can replace photon by whatever: polariton, plasmon, etc.) When the driving is very small, it's always a variation of this idea, however. And we find in the literature a huge, really considerable amount of works all looking at one aspect or another of such an effect, without connecting to the underlying interference. In particular, scanning over the key parameter-space, we exhausted the types of features that could be found, providing closed-form expressions as well as an explanation (classification) of their origin. This is such a landscape below for the drosophila system (Jaynes--Cummings), as computed both exactly numerically (on the plane, with red bunching, white uncorrelated and blue antibunching), and as 3D lines the antibunching lines, both CA (conventional antibunching) and UA (unconventional antibunching, dotted), combining their shape in the parameter space $(\omega_\mathrm{L}, \omega_a)/g$ of driving/detection frequencies in units of the coupling strength $g$, and their magnitude, along the $z$-axis. We also wrote an applet to explore the more general case:

Landscape of two-photon statistics $g^{(2)}(0)$ from the Jaynes-Cummings system under weak coherent driving, as a function of where you drive it ($\omega_\mathrm{L}$) and where you detect the light ($\omega_a$), both in units of the coupling strength $g$.

This is a complicated figure to digest, but it tells you everything that there is to know of two-photon statistics (antibunching and superbunching) from the weakly-coherently driven Jaynes--Cumming system, bringing together features otherwise found scattered in the literature. When we made this connection, we produced a big text (that we called between ourselves "the mother paper", because everything seemed to come out of it) to cover for sufficiently different platforms to show that this was something universal. We made a silly mistake of submitting it with its TOC on the first page, that we thought would help to navigate through the long text. 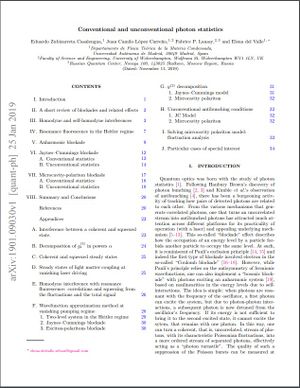 This triggered the immediate reaction from two of our Referees, that the text looked like a review and would better be published as such. That was a disappointment, of course, since although it was reproducing known results (as particular cases), and that several bits had already been touched upon from various Authors (such as homodyning, of the $\mathcal{I}$ decomposition), the bulk of the findings were original. Even the editor was inviting us to submit as a Review somewhere else. So we did.

And of course, what happened is that when we submitted it as a review, we got the opposite feedback that much of it appeared to be original research. The cruel irony of it. Months are passing. Our results have been presented in our talks, in this Wolfram applet above, in discussions, emails, we eventually put something on the arXiv, also people started to publish related works, quickly finding their way to prints, so we were getting touchy with the ingrateful mother, although she was still very pretty: even the Review journal and its referees liked it, just they asked that we please publish the original content separately.

Since each journal wanted its share of the whole thing, we could but only split it in two. Not easy, really. Especially as the "Review-referees" were asking for more extensions of a "Research" character: "what happens with dephasing?", and it's really interesting because this actually strengthens the separation of the two types of antibunching, conventional and unconventional: one is robust to dephasing, the other is not. And new resonances appear. So we add another Section. "How about the time dependence $g^{(2)}(\tau)$?", and that too is really interesting because there are well-known strong oscillations (that's why the Referees ask), which had caused much chagrin to unconventional blockade people, and in our picture we see they are neatly explained in the simplest possible way, as the beating from the two fields that you interfere, the coherent and the quantum ones, if they turn out to have different frequencies. So we add still another Section. Meanwhile, we keep discovering new things. For instance, in configurations where the unconventional and conventional antibunching meet, one has the best of both worlds: a lot of signal, a strong and robust antibunching. So our Research-PRA paper grows as well. Since 2018, we're stuck in a monster paper that we can't publish and which keeps inflating. Darwin's nightmare.

Well, eventually, we got there. The day is today. The paper was accepted as a Review in the 2nd journal of Optics, Laser and Photonics Reviews, and even made its cover, which we'll probably be displaying for a long time to come. As it's such a simple and deep idea, constructive and destructive interferences at the multiphoton level, it might be that others find it useful to display it too.

And the Phys. Rev. A paper, which we were sure would take another sixty rounds of referees, definitely complaining now that it wasn't original because already published as a review, still had to be published somewhere because it contained some of the original research which we stripped out from the other one. We were thinking it'd be another of our Perelman type of contribution, to be found only in the arXiv, and thus copiously ignored whatever its content (we're not Perelman, although the blame here is actually not on the Authors). But no! Surprise, the paper got accepted right away this time. As we submitted something largely different, although it was sent to the same Referees, it got a new receipt date. So after years of suffering, it all gets to be published in a seemingly flicker of time.

And this is only the beginning... the tip of the iceberg has emerged already with preliminary confirmations of how self-homodyning produces antibunching in the Heitler regime of resonance fluorescence [1][2], so external, controlled homodyning is sure to come in their wake, and realize the type of stripping to expose your photons as sketched on the cover, leaving them, in their full nudity, as superbunched, or, if clothed suitably, antibunched. That is at the two-photon level. I leave you to wander through the combined 46 pages we wrote about it, to glean what's going on at higher photon-numbers.

I'll conclude with the cover. I learned in the process that there are many different types of covers in these journals: front, inside, back, frontispiece, ... Our making the full-frontal is all the most remarkable if we compare to the beautiful competitors we were facing. The covers of Laser & Photonics Review are all piece of art. They started with an inset illustration on a yellow background, as shown below (with, for this first edition, polymer micro-spheres approaching a pattern of gold pads illuminated by a red laser which traps them): 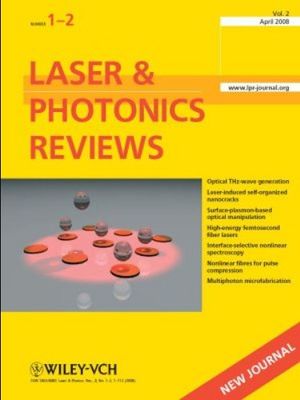 This was a nice, highly sui generi style, which changed in 2014 with a more modern, aesthetical, but also more common, full-page cover. Here is the gallery of last year's (30) entries: 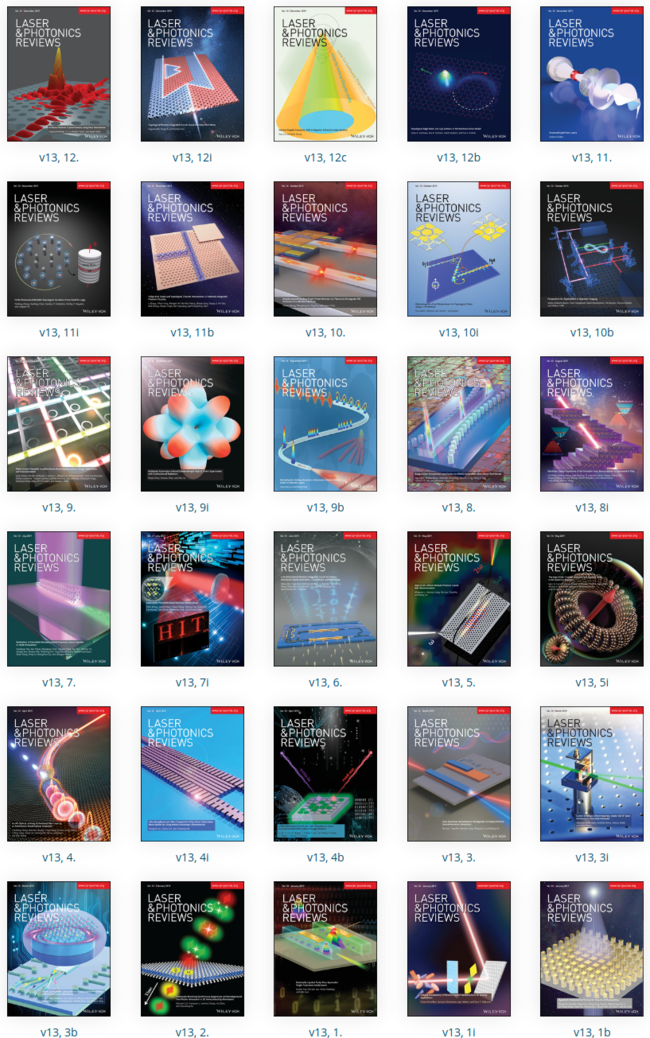 We are happy that this very beautiful Physics, this outstanding, over two-year effort, finally led us to the front page of this great journal, wrapped in a beautiful cover that kept the traces of the Author's "Passion"!

For the next developments of this story, see: