El Conde Duque is a cultural center in Madrid set in a former military complex (what a nice reform). It has a Churrigueresque door and offers free art expositions. 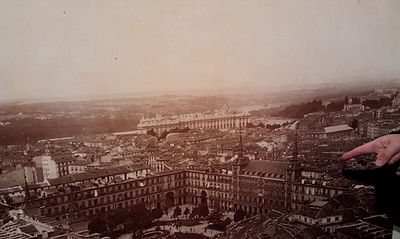 There were three expositions when we stopped by (maybe there are always three):

This is the exposition that we wanted to see in the first place, a collection of photos and documents from Madrid in the period before the war. It was a bit disappointing from the scarcity of material (there were more vintage photos of Madrid displayed in both the bar and the restaurants we went to after after the exposition) and the lack of truly new images (it seems everything is already on the Internet!) The opened books (frozen at a given page under their display) were interesting. One in particular was reporting the complains from Pío Baroja on how ugly had became Madrid. One extract reads:

Photos from this part of the exposition:

A strange exposition mixing drawings with a feel of Chinese ink paintings, with subtle or on the opposite tumultuous digital animation, such as a naufrage in tormented sea, which was a rather gripping thing to look at.

A collection of photos from José Manuel Ballester, mixing natural scenery but mostly industrial complexes from Asturias. A few photos were really captivating, most of them leaving you with a sense of silent wonder in balancing what is the beautiful and what is the ugly.

We met Camilo there and Juan-Pablo a bit later (a bit later after the starting date of the concert as well) at the Sala Berlanga for a representation from the Ciclo de guitarra, with Jesús del Rosario and José María Bandera et al. performing flamenco. The last piece played was Zyryab, which is one of my favorite composition from the master. This allowed me to see the difference between professionals and perfection.