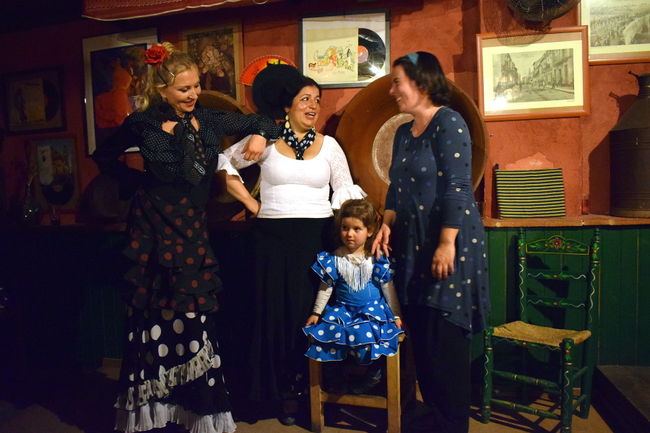 Flamenco is the music of Southern Spain, a mix of Andalusian and Gitanos influences. So potent is it that many see it the most emblematic of Spanish music, if not even of Spain as a whole. It is also of the most attractive display of the Spanish culture, exceptional in all three of its components: music, singing and dancing. It is one of the Masterpieces of the Oral and Intangible Heritage of Humanity).

As an example among many of its perception by the rest of the world, one could refer to Gabriel in un singe en hiver, infatuated with Spain, who illustrates his point that the weather is shit in a small village of France by dancing a Flamenco zapateado that he punctuates with a memorable: C'est ça le soleil!

Maybe the most authentic performance is the juerga, the spontaneous gathering where rhythm and music take possession of the circle of people surrounding the feverish protagonists singing their pain, or love, which is the same, in the midst of jerky clapping of hands and stamping of the feet.

This, however, is the privilege of Southern Spain. In the capital, the next best match is the tablao, a sort of cabaret where you can also have dinner or a drink as if life was really more important than the art that came out of it.

Concerts and other types of theatrical representation push the art too far and, while interesting and of definite beauty, are a variation of the pure style and spirit of Andalusian music that cannot be recommended in a finite lifetime.

Maybe the most renowned artist for the non specialist is Paco de Lucía, the fabulous guitarist, who surpassed the limit of the genre by taking over jazz as well as classical music.

There is a New Flamenco that incorporates or blends with virtually all other types of music (Jazz, rumba, bossa nova, Gypsy, Latin, Middle Eastern, rock, Cuban swing, tango and salsa...~[1]).