The plague of all websites—especially personal ones—is the "work in progress" or "to be continued" which is mentioned at some point and, with high probabilities, since times so remote that it is clear nothing will never be made to fulfill a promise which was once, doubtlessly, dearly committed to. The closest one can find that goes in the opposite direction is the lengthy apologies and justifications that blog authors provide as an introduction to most posts you browse online, where they explain that it has been a long time since they have been able to write a new post. Enduring this, one can then proceed to what one is looking for, the actual content.

The Internet is a great resource, not only for the Wikipedia or Google tools (like Google Maps or Google Scholar), but also for personal content. Unfortunately, things like Facebook basically destroyed the original idea, but there is still much contributed by independent people scattered all other the Internet, especially on the Web's free zone.

A featured article is a concept that comes from the Wikipedia to highlight their best articles. For instance, the Introduction to Viruses, the infinite series 1-2+3-4+..., General relativity and M-theory, Ezra Pound as well as more cryptic subjects such as Watt's After the Deluge painting, the 1937 tour of Germany by the Duke and Duchess of Windsor or the History of the Jews in Dęblin and Irena during World War II (good if you even knew about Dęblin in the first place). There are surprisingly few such articles, namely, 6,090 at the time of writing or 0.09%. There are also Good articles, for which the criteria are less severe and with a total of 36,278 articles or about 0.5%. Even more surprising is the actual topics of such articles and their distribution. For instance, while Bristol is one of the dullest looking cities in England, the Wikipedia sees its page on the Buildings and architecture of Bristol as perfect. There are three Tintin's albums (in Tibet, with the Soviets and in Congo). Why the other albums are not of the same standard, as well as why this particular character should be so crafted (on an English-speaking site) is unclear. There are only 8 mathematical topics (still at the time of writing) as opposed to 201 for video games (such as 1080° Snowboarding, a 1998 Nintendo production) which we cannot understand what makes it special (it is even a short article so certainly not comprehensive), let alone of quality.

On this website, a featured article is, similarly, an article that is in a state of completion and quality that deserves to label it as done and requiring no further or at least immediate attention. Wikipedia's "bronze star" is not appealing and we wanted a way to also, maybe more importantly, classify and record pages which, on the opposite, are under progress, or even worst, stubby! For this purpose, we use the following symbols:

The symbols come from Les Mystérieuses Cités d'or, a French cartoon from Fabrice's childhood, where two characters, Esteban and Zia, were in possession of pendants in various stages of completion, and whose reunification would unlock something wonderful: 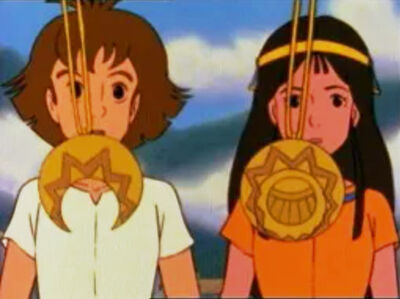 The symbols, that appear on the top-right corner of the pages where they are provided, are clickable and categorized by the wiki engine, so they should help visitors of the site to find pages of interest and/or identify content which, admittedly, is not up to the standard, since we aim to host, among other things, high-quality, world-leading, nowhere-else-better material, in particular from our research and various other explorations. So if you find a

on such a page, contact us to remind us of our obligations to you and the rest of the world.

These criteria, unlike the Wikipedia that applies them to everything from tornadoes to rail transport passing by military ships and eraldry, honors, and vexillology, apply to topics or content which we deem of high interest. Most pages do not have such a distinction, either because we yet did not qualify it as such (such a classification started here on 30 April (2022) or because the content in itself has little interest for most people). As an example, this very page does not follow such a classification, although it is fairly complete.