I have upgraded my extension wz (named after Walter Zorn) to support more features of this great library that provides tooltips.

As an aside comment, although it is something I cannot help but start with, I learned years after I started using his work (at least since late 2007) that Walter passed away (in 2009) [1]. In all the places of the internet where he is remembered, people are baffled by the quality, elegance and power of his code. I, particularly, marveled at the sheer magic he could put on screen (I'm speaking of a time where the feast that are now common on the web required arduous and intricate coding).

Since the beginning, we implemented on our web Walter's tooltips. When we shifted to MediaWiki, we had to do without for a while... until I packed up a little extension to bring them back effortlessly.

We only need basic tooltipping, so for a long time we contented with the most basic effect. Now with version 0.2, you can use all the goodies of the library, listed and documented here.

These are some examples: Come Closer. 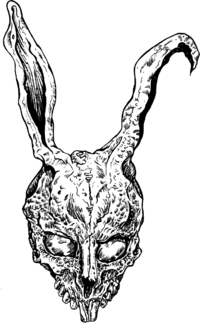 This page of the Philosophy of Time Travel is "click sticky", i.e., it is made sticky by a click, so that you can interact with its content through the mouse but if you don't plan doing that, the tooltip dies when you move the mouse away, so that it is not intrusive.

Try it and treat yourself with a great piece by Michael Andrews. 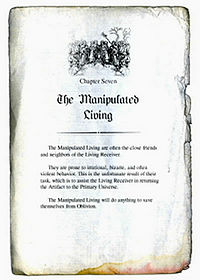 The Manipulated Living are often the close friends and neighbors of the Living Receiver.

They are prone to irrational, bizarre, and often violent behavior.

This is the unfortunate result of their task, which is to assist the Living Receiver in returning the Artifact to the Primary Universe.

The Manipulated Living will do anything to save themselves from Oblivion.