We all eventually get there:

I thought their idea of an ever-increasing mailbox size was 22th-century cool. Now however the capacity is fixed (usually to 15Gb, I got 2 additional ones participating to some program of theirs) and of course you then eventually hit the ceiling. I saturated with over 24 thousands pages of emails and this after several waves of cleaning up (huge attachments, mailing-list, promotions, updates, etc.):

I started using Gmail on February (2007), upon invitation from Mikhail Glazov. First incoming real emails were from Alexey.

And then they flooded by the hundred thousands, hence the problem of storage. Carlos investigated how to deal with that, without paying for the upgrade (he even offered jokingly that I pay him the monthly fee instead of Google and he'll take care of managing my emails).

That's how you do it:

1. Visit this address and ask an export (you certainly just don't want to make room but also keep a copy of what you'll get offline).

2. Check the result... to me it's two small files and an insane huge file:

3. Then go put fire in Gmail. That's what Carlos suggested as an example:

I wouldn't kill only larger ones, as this only makes a mess with the backup. I nuke everything but the first day, to keep a timestamp:

4. Then select all and delete: 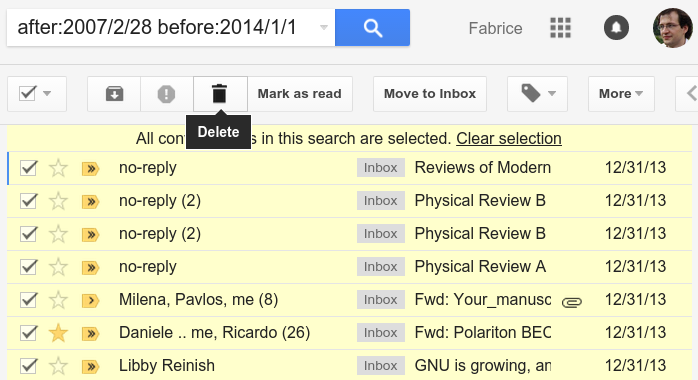 That takes a while to process, as hundreds of thousands of emails get sent to some /dev/null somewhere. But then you feel you can breath again:

5. Finish it off by emptying the Trash:

You can sip coffee while watching the slow process of irreversible termination with its counters hopping by the thousands of these emails you wrote, read, ignored, looked for with keywords or approximate date and rediscovered as precious lost items of far less important than you thought when starting an expedition to dig them out...

But don't daydream too much if you could change your mind, because that's actually faster to get rid of Gigabytes of text than to write and read them.

And that's where we are now:

As we can see, a couple of years—the last ones—weights as much as eight older ones, for about half the capacity. This seems an exaggerated version of a correct exponential trend, that will eventually make such space-saving attempts futile.