While we are expecting our own nativity scene for less than in a month's time—maybe even for Christmas—the traditional representation of the birth of Jesus arrived to the Plaza Mayor. This year, due to the works on the Casa de la Carnicería where it is usually situated, it got a much better privileged position: at center of the square. These are some pictures and the starting-up of one of our own tradition to go with it.

In Spanish, the Nativity scene is called a Belén, which is the name of Bethlehem in this langage. In French, it is called a Crèche, after the place itself where the birth takes place.

For Christmas, there is a traditional market on the Plaza Mayor (with 104 stands), focused on Santons, that is, those little figurines that assemble or decorate the Belén (santon comes from santoun in Provençal, meaning, "little saint").

Given the timing between Navidad for the Christian world and our own, we decided to assemble our own Belén, despite the increasingly violent atmospheres of our times related to everything that expresses a religious theme (not even a sentiment) outside of a praying spot [1][2].

We will do it one piece at a time, starting with, of course, the Baby. Next years should go with the mother, the father. When Julia is in age of understanding Christmas, we will get the Reyes with her, since those are the one bringing the gifts in Spain. And when she'll be in age of understanding it was all only for fun after all, we'll carry on with the animals, the fixtures and the accessories, the machines and, ultimately, the people, since it always come down to them, at the end. 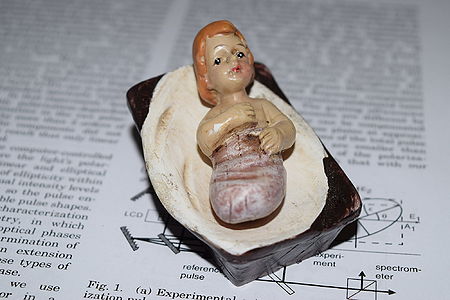