Regardless of a gloomy situation and of everything bad that may/could/can/will happen, one has to strive to be happy, resolutely happy, hopelessly happy, I therefore wish to wish you (no pun intended) a Happy New Year.

To emphasize that, I'll put it apart and in the official languages of our little group:

This being said, when thinking of which tone to pitch one's New Year Greetings with, I have to say the World's state of affairs still looks distressingly bad. The economy gives no hint that it will not crash nastily, being all the more a deplorable event that the so-called crisis is not an uncontrollable jolt of a complex system but a deliberate attack from the banksters on the people, dragging in its wake everything ugly that comes from money, from mere spoliation of society to the worst conceivable crimes.

Complex systems do have genuine uncontrollable jolts of their own, and in their always more daring attempt to secure a better control of the planet's wealth and of the mass of people through shock doctrine, the ruling elite—not that much the politicians who are the corrupt facade—but those in the closer rings of money, may finally give to Disaster Capitalism its literal meaning.

So far however, everything would seem to go according to plan. "Man is a creature who can get used to anything, and [...] that is the very best way of defining him" wrote Dostoyevsky in the opening lines of Записки из Мёртвого дома. This is true. People get used to money duress, to ever worsening working conditions, to degradation, to reduced rights and increased surveillance and why, therefore, those who make money out of it would reverse or tamper the trend? Here and then, we even start to hear that the situation is on its way to recovery. Thus, while it is commonly accepted that the financial crisis is irrecoverable, the general spirit is that it the end it'll turn out right. It will, for sure, before it gets worst again. Our main concern here is how badly, and by how much, it will go before it gets a chance to truly recover. It seems that social rows are not those that trigger the revolutions anymore. These are caused by direct financial factors.

Shortly after the IMF "recommended", in October this year, a 10% tax on private wealth in a memo aptly titled "Taxing Times" [1], merely to bring down public debt to precrisis levels, the EU kindly obliged and passed a "directive" in this sense, on December 12.[2] 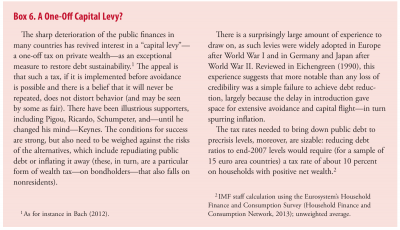 Taxing Times: The IMF recommends a 10% capital levy on households with positive net wealth [...] before avoidance is possible. Page 49 of Ref.[1].

The EU "deal" (this is the word they use in the press release[3]) is know as the "Bank Recovery and Resolution Directive" (BRRD), and is announced as a protection for the tax-payer, who will not be forced to bail-out the bank. Instead, the bank will be bailed-in, which means that the money will be taken directly from the tax-payers' savings instead.

In passing, this is interesting to see how such a measure that is sure to send waves of people in the streets when it will strike, has been passed in the "parliament". This is taken care of by a so-called trilogue, which is the EU counterpart of Napoleon's consulate, that is, a trio to give the impression of shared responsibilities, of multiple involvement, in an organ that is in fact despotic (you can see the "trilogue" working on the BRRD here and here).

The document itself is, in contrast to the box of the IMF memo, a monstrous administrative text. But it comes with a plethora of companion documents, all listed in there, including a Citizens summary. The latter document says very little, or says other things (e.g., the starting date is scheduled for the beginning of 2015 in the citizen version while the text itself refers to 2016). It is of coursed always painted as a positive move, a defense from the banking system and a strike to its malpractices. The seriousness of this can be confronted to the fact that the starting date, initially scheduled for 2018, has been advanced to 2016 at the demand of the European Central Bank [4]. This is one of the most relevant pieces of text from the Statement by Commissioner Barnier:

The new rules provide authorities with the means to intervene decisively both before problems occur and early on in the process if they do. If, despite these preventive measures, the financial situation of a bank deteriorates beyond repair, the new law ensures that shareholders and creditors of the banks have to pay their share. If additional resources are needed, these will be taken from the national, prefunded resolution fund that each Member State will have to establish and build up so it reaches a level of 1% of covered deposits within 10 years.

This is quite illustrative of how euphemisms are used to sell as a responsible and courageous policy a measure that some economists regard as pure robbery. Note also the built-in contradictions, since one wonders how the fund of "1% of covered deposits" to be "established and built up" by each Member State will be realized without involving the tax-payers, who are supposed to be those benefiting from this law (as tax-payers, while sufferings as bank creditors). Later on, one finds that banks should participate to this fund, and the more-so the the more risks they take, but this only completes the panel of conman tricks since the lack of details or quantitative figures makes it pure speculation as to what it is supposed to mean.

What it does really mean, on the other hand, is quite clear. People's deposit will be taxed, in a spirit very much similar to that which was experimented upon Cyprus. Finally, the acounts with less than 100.000€ were left untouched, and there is also such a close somewhere in the EU directive. But...

I could carry on at length on why the whole approach is unfair, outrageous, nonsensical. But this is not even my point, rather, this is an illustration of the point. The economy, the spine of our society, is wrecked and will most likely snap, resulting in an even more likely tragic outcome: generalized indigence, violence, crimes, rebellions of all sorts ranging from verbal abuse to physical aggression, lynching or summary executions, met by the corresponding spectrum from the police, ranging from arrests, incarcerations, beatings to people being shot.

And in the wake of the economy, that is at the center of the problematic, come the attacks on freedom. The © business, proprietary softwares, etc., get increasingly aggressive. Every day, freedom of speech is under peril. In France, the situation has reached absurd proportions with the criminalization of a humorist, Dieudonné, who built in the ostracization from the media a Fight-Club like group of followers by serving them a discourse not too far from that of Chuck Palahniuk's novel:

"The people you're trying to step on, we're everyone you depend on. We're the people who do your laundry and cook your food and serve your dinner. We make your bed. We guard you while you're asleep. We drive the ambulances. We direct your call. We are cooks and taxi drivers and we know everything about you. We process your insurance claims and credit card charges. We control every part of your life. "We are the middle children of history, raised by television to believe that someday we'll be millionaires and movie stars and rock stars, but we won't. And we're just learning this fact."

Like any other cult following, they have their inside jokes and personal signs of recognition. The good taste and soundness of the themes thus treated are an altogether different question. What is surreal is that the French president in person and the top ministers of his government, premier en tête, got personally involved in repressing the artist and his fans, sometimes with jail sentences[5][6]. The events culminated with the last minute cancellation of one of the artist's show by the Conseil d'État, the highest french judicial jurisdiction, overruling a decision of justice from an organ of the power, demonstrating the illusion of the separation of powers. The details of the affair show many worrying malfunctions but as well still a capacity of resistance and outrage from both the institutions (there is more opposition against than support for this "ordonnance Dieudonné") and the public at large, as illustrated by the this snapshot I took when I tried to figure out who was physically behind the Conseil d'État. Their web is down, due to too many people with similar preoccupations: 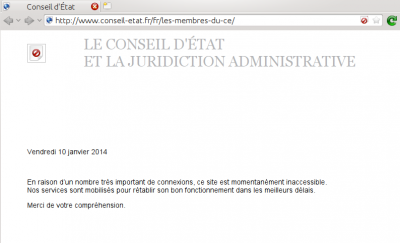 At the same time, a related political association, saw its publishing house (Kontre Kulture), forbidden from publishing a book and compelled to edit out parts from four others. This would already be a scandal in itself, no book, whatever it says, should be banned. But where this becomes shocking beyond understanding is that among these books is Leon Bloy's masterpiece Le Salut par les Juifs, where the author pens his reflections on the Jewish question, that from my perspective greatly surpass the classics on this topic, such as Marx's On the Jewish Question or Sartre's Réflexions sur la question juive. Ironically, Bloy wrote this essay in response to a Jew-baiting text, La France Juive, which is one of the other books from this association, condemned by the French justice. There is, therefore, a great deal of confusion, but overall, there is first and mainly blatant political repression.