I am in Freiburg for my 45th year on this planet that is also 7 months and 7 days (218 days) of what never looked so much like the 3rd world war, with the recent explosion of the gas pipeline from Russia to Germany (this was four days ago) and the annexation of the four regions of Luhansk, Donetsk, Zaporizhzhia and Kherson to Russia (this was today).

I was trying to find a bit of stamina to work on any of the four or five very urgent things that are chasing me, the most exciting one maybe, but everything looked beyond my abilities to cope with, even what is interesting. Like Bernanos in his "dialogue des Carmélites", I feel defeated to the point of death each and every evening. I took a stroll in the beautiful city center instead, looking for local food, white wine, and inspiration. I met instead with the Siegesdenkmal, or memorial for the siege of Belfort, with a little child statue on one flank of the godess of war, looking at me gripped by a profound bitterness.

The panel I was looking at was marking the 15, 16 and 17th of January 1871, when the war was lost by all in the way of a victory for everybody: the Germans could not subdue the Alsacian city (this gave rise to the famous Lion of Belfort) and remained in check by the French defenders who, on the other end, were summoned by the central government to surrender the city as part of the general armistice. The soldiers, who complied, were nevertheless allowed to leave with their weapons and marching to the sound of trumpets. Maybe as a sign of respect, the Germans agreed to leave Belfort out of their territorial demands, otherwise annexing the rest of Alsace. The battle is notoriously a great victory for all sides. It indeed was, if you compare it with the sequel war. 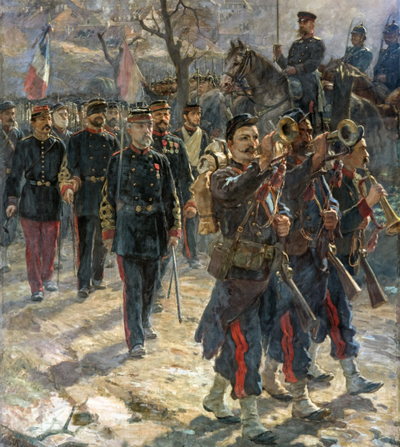 On this side of the frontier, by the feet of the little granite boy carved in stones from the Black Forest, I decipher what I suppose is a tribute to the German victory, recognizing famous, legendary, timeless names of what still feels like my country, on this German monument: Dijon, Autun, Langres, and others which I discover: Pasques, Vellefaux, Villersexel, even a Nuits... I should go there. Apparently, the Germans have. I see we have a Château, the Château de Nuits!

The key events that unfolded for the statue to mold and stand, took place 151 years, 8 months and 2 weeks ago, well over 55 thousand days. Still, not that much time when one realizes how many wars did take place in this interval, between the statue being erected and my coming to meet it; between this war that knew where to stop and that of today which is on a course set for, if not total, unheard-of as of yet level of destruction.

Back to the present, Putin offered today a ceasefire following his redrawing of the map and menaced of violent response would the newly acquired territory be threatened. Of course, this is a cheeky rhetoric. I would recognize the moral right of Russia to strike back if attacked on its traditional territory but annexation with immediate acquisition of an untouchable status is not acceptable even by pro-Russian observers. On this logic, they could extend their frontier as far as they could push the frontline. Regarding the referendums justifying annexation, given the wartime situation, they are of dubious validity anyway even if there would be no fool play, which is also hard to exclude in such a context.

Would Russia thus escalate beyond measure their response to attacks on the freshly annexed lands, that were still "conventionally" fought for and over for the last 218 days, that would be Russia's third major mistake in the eye of History: the first one being the invasion in the first place and the second—which I did not comment upon, previously—being the involvement of the general population by mean of mobilization. It might be that Russia cannot endure much longer an ongoing conflict and needs a way to bring it to a stop immediately, retreating not being an option. This cheap trick of nuclear deterrence might be their best course of action, given the situation, in which case that would also be the most desperate and last recourse one already.

Unlike the siege of Belfort, where both parties agreed to lose in such a way as to make everybody a winner, it seems that we are today in the opposite and less fortunate situation where leaders are willing to go for a win that will make everybody a loser. Although the stakes are much greater, we live in a time where there is no respect, not even tolerance for the other side. Only hate, a blind, total, irrational, resolute hatred. The type that pushes you to prefer annihilation to even a favorable compromise, if that also means annihilation of the "enemy".

Still marveling at the statue, a tribute to moderation and face-saving, I come to the same conclusion as previously that Russia must be allowed a way out, and since that was not granted before, that must be now on even a tougher one to swallow, that is, to acquire these Ukrainian regions and a ceasefire to be enforced. Then the world must look forward to future diplomatic solutions, compromises and negotiations. I'm undecided if that makes Putin a fine strategist or the archangel of death. The unraveling of the events will tell us. That has always been the only solution, doubtlessly, the alternative being a head-on, possibly nuclear confrontation. Would we prefer that? I'm afraid that, indeed, those who decide for the we, would.

It is indeed even more clear now than it was a couple of hundred days ago, that no way out will be left available to Russia. Even their complete retreat, which is anyway out of the question from their side, would not be enough for those supposedly in charge of our interests, which they call "values" instead. I'm therefore bound to conclude that we are heading for further escalation and a very nasty outcome. At the very least, a freefall of the economy and a sudden collapse of the quality of life of Europeans. They will know again what it means to be hungry and to be cold. That is in the best case scenario. Middle-case is civil unrest and brutal police repression in the streets as people will try to get back control of a sovereign sentiment to protect their national interests before their European "values". Worst case is a direct military conflict with modern weapons bombing the old continent, with French and German now sitting together below foreign bombs.

Although naked and in the wind, the child is still smiling. It has been doing so for centuries. It survived bombings from the 2nd war, it survived pacific groups not understanding its celebration of winning a war by losing it together with your enemy, it will keep doing that until it gets smashed to powder by a bomb deciding that Ukraine will never be Russian nor American, least of all, Ukrainian, it will not be at all, like everything else.

As for me, I will have to wait until the morning to be reborn. Distressingly, it seems that humanity as a whole is granted a similar Bernanosian night cycle, only with night periods much longers than ours. And the sun has just set.