-58: Distribution of the forces

After losing his first election in Parliament, as could be expected after the bold move of shutting it down, Boris Jonhson is hoping to get back the upper hand by turning to general elections (following the bill that the house will set up to block no-deal-Brexit). The battle between a bold and vindicative resurgence of Charles I and a Parliament which also kept its pride and independence, is afoot. What is the distribution of the forces? Or, in other terms, who will win Brexit in the long term?

In the historical dispute that led to the English civil war, it is not clear who actually won. Charles I lost his head but so did Cromwell, although this was posthumously, and Charles II came back for a restoration that, on the other hand, also strengthened parliament. So who won the argument, is not actually very clear. When I asked a guide in Worcester about modern people's feeling on the outcome of the Civil war, she told me "we British people do not like to make judgements on periods of historical turmoil". Who knows what they think? Do they actually think anything? To me, it looks more like a stalemate.

Brexit currently looks a bit the same. Parliament and a majority of people against no-deal-Brexit are opposed to the Government, the Queen and a majority of people wanting Brexit. In this distribution, some people fight on both sides. Where will they stand when it comes to deciding? Parliament can (and did) block the Government, but in the general elections, support for Brexit will undoubtedly prevail. However, it is not clear that no-deal Brexit is so strong. So people will be faced with two options:

In both cases, the battle is not in the house anymore, the fate is already to be sealed through the next general election. This will serve the role of a second Brexit referendum. People don't want to go through such an ordeal again, and being quite upset, voting emotionally, anything can come out of it.

It is my feeling that since people are sick of Brexit, they will choose the former option. Politics by the people is expeditious, brutal, craving for immediate results and careless of the consequences. Even "remainers" certainly prefer Brexit over uncertainties, unending debates and inaction. The main strength of Jonhson is, he will make a move. Of course, his weakness is, no one knows how good or bad a move this is. It could be a fatal one, especially as the EU will probably not agree to a deal and it will be in its interest to see a struggling UK post-Brexit, as EU's own survival is at stake. It could be, in particular, a blunder for the Union Jack. If you look at the map, there is a neat cut between England and Scotland. 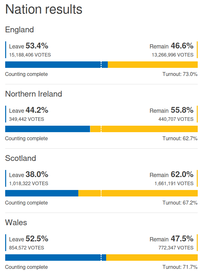 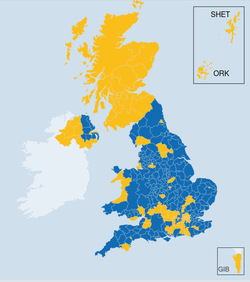 (See also a detailed breakdown of the results). Scottish, who demonstrated a great political unity, would be quite entitled to reclaim again their independence in case of a no-deal Brexit. This time, a referendum would likely be in favour of a divorce, especially as the EU would spare no support and expenses for that to happen. Interestingly, the Scottish Pounds we brought back from our last visit to Scotland were not accepted in England. We had to change them at the bank. I found that disrespectful and irritating myself, and I'm not Scottish. Not even apologies (meaning, sincere apologies). People just seem to see that as funny-paper for kids up there to entertain the notion they have some sort of identity, "but we don't want to bother with that in England". Also Northern Ireland is divided depending on its proximity to the border (excluding Belfast), and overall was neatly in favour to remain. A re-united Ireland could also be a consequence of a no-deal Brexit, which still has no inkling of a solution for the frontier problem, which is of civil-war calibre.

What would remain then? Although the Royalty who backed-up the prorogation of parliament fell the blow on twitter, it is unlikely to be a direct victim, unless, of course, the Kingdom is not United anymore.

It would be an ironic twist, in the full tradition of the best British-humour, that where the Spanish armada, Napoléon, Hitler and still other unstoppable forces have failed, and broken into pieces on the British reef, a mere Article-50 would succeed. Of course, it is also possible that the post no-deal Brexit will not be that apocalyptic. Although it is my feeling that the EU will not help in that direction. It already announced that it will concentrate its economic resources to support those member states that could be affected by Brexit. Meaning, it will make sure that interested countries will not find their own, independent and individual agreements with Britain, but will get benefits from the EU instead, to leave it free to asphyxiate UK. Clearly, if a no-deal-Brexit UK thrives, Italy and France will be absorbed in its dynamics.

The other, less likely option, is that the government will not be able to carry on with its forced Brexit, and another period of extension will take place. It was already incredible that this was allowed to happen across the European Elections (for which Nigel Farage's party came first, by the way). The strength of this side of the argument is that the extreme consequences that suddenly become within the realm of possibilities will be safely kicked into an indefinite future. The weakness of this is the impotency of this utter confusion whose grip will widen to all sectors of life and society, with a considerable weakening of people's trust in democracy, which isn't that bad in the UK (but other countries where it is typically very bad, can nevertheless deal with it) and, more importantly, growing tensions in the population, possibly with a surge of xenophobia and Europhobia.