Parliamentarism has demonstrated its limits in many countries on several occasions. But if it would come to break in the UK, that has this institution as its symbol, which has installed this system in the first place, where it has been the most carefully and effectively implemented, that would be a world-shaking symptom of a political illness of our time indeed. Currently, Boris Jonhson who still tweets every day that UK will leave by the date he swore on, will have to sign himself a letter already written (by Parliament) to request for an extension. What a personal humiliation if he has to do that, but it would be the last possible delay this time, which would still be a defeat given that he publicly and officially stated that he'd rather be 'dead in a ditch' than go back to EU to ask for Brexit delay. After all, he could have allowed himself one if and one but to cover for the very configuration of systematic obstruction that he has been facing. The failure of foreseeing that makes him a failed politician indeed. In such a case, he might leave for someone else to complete the job. Even more now than ever, it seems that Brexit can only have losers on all sides. The most conciliating move would seem to allow for the backstop after all and go with Theresa May's deal as the least bad alternative to a no-deal, but that would make everybody agree on something that nobody wants, so this seems even less likely than a bolder, unsuspected move. 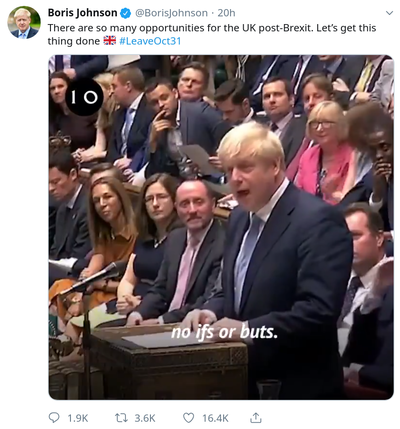 Brexit is full of surprises. To impose early elections, it has even transpired that the government could have called for a no-confidence vote in itself, which the opposition would then had to reject (effectively recognizing its confidence in the government). By refusing early elections, parliament thus forces another report (apparently to end of January 2020 although the EU could demand another date, say, 2022), unless the government finds a way but given the short notice this would imply, it would probably be too risky and exert too many tensions. Let's still toy with the possibilities. Maybe the UK government could promise Gibraltar back to Spain in exchange of this EU country rejecting the extension (which would force Brexit from the EU side) or find another cunning way of this type. Or the prime minister could just not sign the letter, and the force of law would bring the UK out. While suspending Parliament was fully legal, this, on the other hand, would rightly be regarded as an undemocratic coup. There would be much turmoil, but Johnson would have delivered his promise.