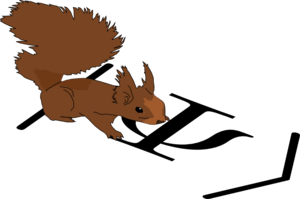 While the project is now officially ended, the momentum it exerted left pending a handful of manuscripts and another of events to be released in the coming months. Visit often!

Quantum correlations are those supporting technologies such as quantum information processing. For realistic applications, one has to consider open quantum systems, that is, in contact with the classical world through lifetime and excitation. 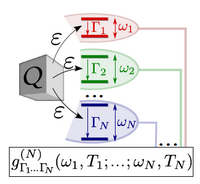 Quantum correlations are transferred through emitted photons, electrons, etc. and characterise the quantum structure of the system and its suitability as a quantum device. A fundamental and popular way to quantifies them is through Hanbury Brown-Twiss two-photon coincidence counting, which is a particular case of the general problem. At the speed of technological progress, it is now becoming possible to measure higher order correlations of quanta characterized in all their attributes. For instance, cross-correlating photons with fixed frequencies and arrival times is now a routine practice in many laboratories worldwide. The correct interpretation and mastering of such techniques will allow a robust implementation of quantum protocols. 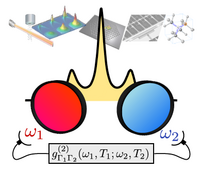 Theoretically, the computation of such correlations is complicated and tedious as it needs to keep in the calculation all the degrees of freedom for each carrier. Our recently developed formalism, the sensing method[1], allows to deal for the first time with complicated quantum systems[2][3], with many degrees of freedom and particles, and to compute $N$th-order correlations, with $N>2$, at arbitrary times and frequencies. See this video abstract for a quick introduction to the topic.

The goal of the SQUIRREL project was to develop and disseminate this novel and interdisciplinary theoretical approach in a wide range of quantum systems (cavity QED, superconducting circuits, atomic and semiconductor systems, plasmonic, Bose-Einstein condensates, etc.), by analysing the physics made accessible by the sensing method, by supporting experiments on quantum correlations in a variety of fields and by exploiting correlations to improve and design new quantum devices. 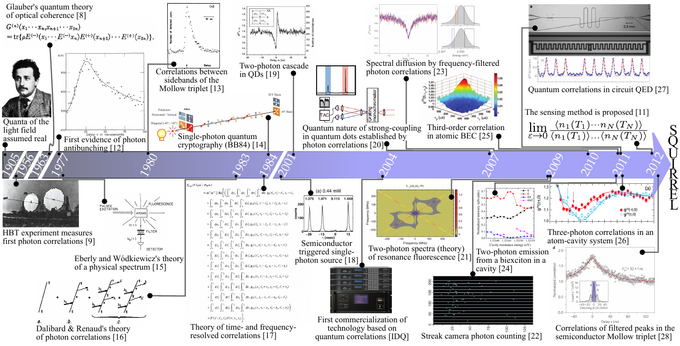 Timeline of breakthroughs providing a background to the SQUIRREL Project.

The most comprehensive account of the project's results is its list of publications, which content stores for posterity the exact nature of the scientific output. Here, we limit to a short and simplified discussion of the two main scientific breakthrough directly related to the project:

In physics, a theoretical idea thrives when it is confirmed experimentally. In our case, the theoretical idea is that much information lays hidden in the usual averaging that is made over the frequency when detecting photons. A central quantity in quantum optics is the so-called Glauber second-order correlation function $g^{(2)}(0)$, which quantifies correlations between photons. We have shown how this single number gets upgraded to a rich landscape of correlations—the two-photon spectrum (2PS)—when retaining the frequencies~$\omega_1$ and~$\omega_2$ of the two photons[3]. Such a landscape is shown on the bottom left panel for the case of resonance fluorescence in the Mollow triplet regime (top right inset) in a driven semiconductor quantum dot (top left). 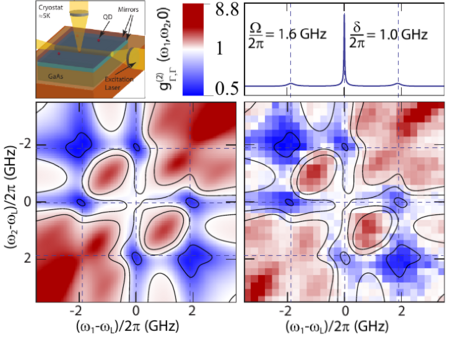 On the $x$-axis you have the energy of one photon and on the $y$-axis the energy of the other photon, and colors tell you: blue: photons repeal each others in their arrival time (antibunching), red: photons get cluttered together in their arrival time (bunching) and white: photons are uncorrelated, their coming together or separately is ruled by chance. This is explained in slightly more details by in a short video and in this Google+ post.

The breakthrough in the above image is that, sitting nearby the theoretical calculation is an actual experiment, that of Andreas Müller's group at the University of South Florida (see their paper for details and this post on Science on Google+). The agreement between theory and experiment is impressive. This work shows that coloured-photon correlations are sound and behave with great accuracy in the way they are expected to by a fundamental theory, even in complex systems such as semiconductors, they show that concepts like "leapfrog processes" (apparent here as the reddish spots) appear in full view when one knows where to look at. The increased control of such photons correlations can be used for a wide variety of applications, such as the violation of Bell's inequalities[4]. This should open a new page, if not a whole chapter, on the problem of dealing with photon correlations.

The leapfrog processes are one of the most direct resources made available by frequency filtering. If they fall on the diagonal (of equal frequencies $\omega_1=\omega_2$), it is as simple as intercepting them with a cavity. Their Purcell enhancement will then open a new channel of quantum emission, turning these virtual processes into real and strongly correlated photons. This is the idea underlying the bundler[5], a device proposed theoretically that emits all its light in groups (or bundles) of $N$ photons. This is, essentially, an emitter of Fock states $\ket{N}$ for tunable $N$. The artistic illustration below shows the case $N=4$. Instead of emitting photons, the devices emits four-photon bundles each time it fires: 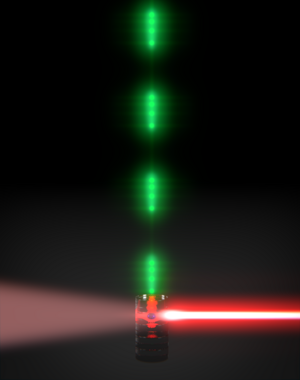 Such a device would be a new player in optics, possibly making the same step for quantum technology as was done by the laser for classical optics. Not only does it joggle the fundamental Planck constant (since now one lump of light of frequency $\nu$ comes with the energy $E=Nh\nu$) and bring a new light to light in several aspects (a News & View by Dmitry Strekalov discussing the bundler opens with the line "Our concept of light has undergone a remarkable evolution"), it also promises immediate important applications and not exclusively in a quantum setting, but for medical purposes, e.g., in tomography. See this blog post for a more detailed discussion of the properties of this prospective quantum device. 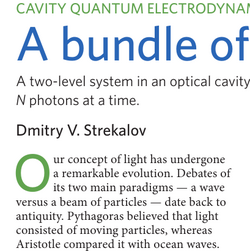 SQUIRREL has traveled the world to disseminate its results:

1. St-Petersburg (Russia), 28-31 May 2014: Invited talk at the International Conference on Problems of Strongly Correlated and Interacting Systems.

In September 2015, the evening of the 25th, in Madrid, I participated in the European Researchers Night, with this introduction and an activity on the HOM experiment, as part of the TecnoUAM activities.

It was a cooperative quiz game to help the general public discover and have a feel for the secrets of quantum mechanics, based on one long-term goal of the Squirrel project: the HOM effect. This is the summary of my activity:

It was a very popular activity with plenty of science lovers and good questions!

Late 2015: To be held at the IES José Luis Sampedro school in Madrid, in collaboration with the mathematics teacher Marisa Vila. More information to come.