The PolaChess tournament was the PolaFlow chess tournament that we entertained while working as a funded scientific group at the Universidad Autónoma de Madrid. It was a Round-robin, 15 minutes time, 0 increment tournament played during coffee time. Both a PolÆlO rating and centipawns were computed. The person in charge was Juan Pablo.

An Elo is computed, with a $K=32$ constant and with 5 provisional ratings for players not part of the PolaChess pool (we assumed established ratings for everybody who joined the tournament at $t=0$, which is not a problem as their ratings will converge but we need to take into account occasional games as provided by visitors). Specifically, the $K$ factor is scaled by $3/\big(4(5-i)\big)$ (i.e., down) for the established player and by $3-(i-1)/2$ (i.e., up) for his opponent for the first $i<5$ games of the new player, after which point $K=32$ again. Explicitly, the $K$ constants for the new player go:

while it goes, for the established player:

The end was not recorded as it was too fast for the transcript (Pablo). Apparently an illegal move was made with a rook. The game ended in checkmate in a race to flag for time.

Camilo wins on time. Interestingly, 24. Qd6+?! is not a blunder (only a mistake). The next move, however, is a proper queen panick moment.

The end was not recorded as it was too fast for the transcript (Pablo). The game ended in checkmate shortly after the last position shown.

Shortest game so far, which left us time to play a king of the hill variation (which Camilo won, against Fabrice, by checkmate on a too daring king).

In a raging fury against our Colombian community, Santiago proceeds to calmly walk his way back up the ladder of the tournament, methodically resisting the attacks of White who, in their traditional style, succumb to their own pressure and split out to surrender their queen on an otherwise leading position. The shat queen moment—this move of the game where Juan Pablo becomes chess-blind and positions his dame in front of a pawn, bishop or right below the roofs of a knight—occurred here on the (Friday the) 13th move. It was then just a matter of carefully moving the heavy Black artillery left around, with little but enough time left to enforce checkmate. Playing with psychology on his side, Santiago allowed himself the occasional glance through the window, à la Bobby, which was a nice touch.

A game of tension, of tension going too far. First 10 moves or so have been slowly, carefully considered by both sides and getting the pot to almost boiling point. Then David blunders his queen away, 11. Bd3?? Even then, to strike mercilessly, Camilo took his time, and brought the heavy knight falling with all the weight of an actual horse on the square that meant defeat for our French contender. But there's nothing that you can do to vex David's attitude. He regarded this move as mere trifle, displaced his king and carried on with a face of steel. Time was still equal. But with time passing and nothing to loose, it was easy for Black to arrogantly pretend they could still play, and with the face of conquest, advance a minuscule little pawn towards recovering the wasted queen. White started to play faster (which is good) and with too much confidence (which is not), with some irrational fixation on delivering check. See 22. Qc4+?, letting the knight go away. At this point, or not too far, a girl who popped out of nowhere tried to get under the table to reach something below Camilo's bench. Upon inquiry, and thankfully, it turned out to be only for a coin that rolled all the way from the vending machine to our competitor. We had to pay the girl to go away. Too late. On 26th move, the blunder of the day changed the game's fate. In a mate-in-5 position, when everybody started to relax and think about the coin below the bench, Camilo spin out of control: first sacrifice of a bishop, 26. Bxa6+? then throwing the queen in its wake, 27 Qxa6+?? The move was stopped in mid-air, in a frozen time and space with only a resounding "too late, too late" from David, detonating in a cafetaria getting a moment's interest into an apparent scandal. Then in time trouble, psychologically ruined, pursuing illusory checkmates through pointless checks, only defeat could follow for White, who lost on time.

We have a new player, Javier, also the strongest one (playing in a club), so this is great news for our competition. Javier enters with the provisional rating rules, so his rating changes a lot, sinking to 964 as he lost the game, while Fabrice's (yours truly, writing this comment) changes little, winning only 2 points in what was the most difficult game so far. Actually the game was a win for Black, who had a mate position in move 31. Qg4# Chess being a game where a single mistake can overturn everything, since 31. g6+?? was played instead, a Berezina was turned into a Campo Formio. A mate had been announced, and as I had seen the mate with queen, I accepted the claim as valid, but the Referee (Pablo) observed this was not checkmate, so the game carried on, and after forcing the exchange of queens, Black was in the mental despair situation and did not try to fight against the rook. A careless knight move led to his capture on discovering a check, and Black resigned. This is a victory from a lost game. But aren't many victories like that? (especially when involving French players?) Like this, everybody's a winner: the good chess player, who loses on a blunder and the loser, who wins as a patzer. To make things worst, on move 15. a super-castling 15. O-O-O-O was attempted, conveniently getting the king on d1, but of course the referee objected, and everybody laughed his ass off, not letting me add another quantum move up my sleeve of illegal tricks. Still, the game continued.

The main feature of the game as far as I am concerned is my move 7. c3?? which the audience took for what it was: a blunder, but assuming a stupid oversight, while it was really a gambit. Which one? This is the variation I had in mind (you can play it in the game below as the 2nd variation):

The knight has ultimately to move, leaving the Black king naked to an attack from the White queen supported by the king's bishop, and pinned by the White king's bishop. This leads to aggressive attack that, in time battle, may be worth the small loss in material. I'm fairly sure in the queenside castle of Black, this provides an actual advantage (my experience is that strong players tend to reject this gambit). Here, though, the knight was in the way, Javier is a good player, so he had time to develop his pieces to turn this hurried and lame attack into a sound counter-attack. In fact, even if I hadn't shat the horse in the middle, this was a mistake, since, so the computer analyzes:

The queen still looks dangerous but the analysis shows that it's still better for Black.

Another new player, Amir Rahmani, joined the tournament to defend the colors of Isfahan against Stefan who took a bye from our club player till Wednesday. A strange opening and a dangerous unconvering of the king-side let Stefan, who was mentally and physically preparing himself to destroy Javier, have an easy win. Tomorrow, Amir vs Juan Pablo. Bets are opened. Will the "shat queen" get in the way of another assured victory? Or will Amir toy again with irregular openings?

A late PolaChess session today, since Amir was looking for his new place to live (which he found, by the way). Everybody was expecting a bold queen sacrifice from Juan Pablo, which, not disappointingly, duly came on precisely the traditional 12th move. We let you discover this fantastic queen blunder of majestic proportion which, as it should to have all its savor, was played on a strong, if not winning, position. 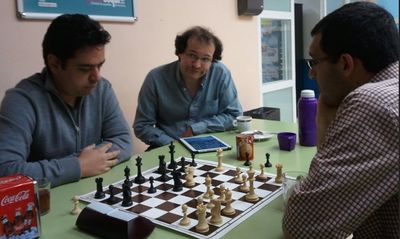 A tense game with a leading White who started to make little mistakes then bigger mistakes then a fatal mistake that let Black recover from a lost piece to a winning position. The message here is: Javier can blunder, so he's reachable, but only once, so remain careful.

An equilibrated game, that Black loses on time, allowing not to be mated next move, although the mating position had already occured. A couple of times, the battle swung back to a possible win for both sides and even came to a nice confrontation of strong positional advantage against strong material advantage after 19. dxc4??, although the last attack from Camilo, stabbing the rook, was a decisive one. Interestingly, 17. Rxe6+ (where even a mate was announced) is not a mistake, as it allows to pursue the same idea with the other rook, which did not happen in the game, illustrating again how weak is the move that follows a supposed mistake on the board. White wins 7 points, Black looses 35 in this provisional game.

Lost on time but lost strategically as well from a too nervous Black who let White come back.

The PolaChess game of the century. So crazy, its records got lost and the game had to be reconstructed from scratch and sheer efforts of the memory. Our first draw of the tournament with a dispute on whether Black was flagged on time (which couldn't be since White moved last anyway, leaving two naked kings on the board). Black, at the same time, had a mate in 29 moves on the 40th one. But not enough time, not enough concentration, time flew away as the queen promoted and an ultimate embrace of the king and queen of two colors led to a shouting sequence in the cafeteria. Dust settled down, agreement was reached, Black got 5 little points out of it, White lost one.

The game was also lost by the person who tracked the move on the phone.

The game was lost by the person recording it (Pablo). Fabrice won.

Based on Computer's random sampling. Games that cannot take place are either skipped of flushed to the end.

Decided at the last minute on people's availability.