Children's drawings is a fascinating topic. Is it the only childhood cognitive behavior for which there is any direct evidence from the Upper Paleolithic[1], and it has also be linked to intelligence, which is not surprising, but in a rather quantitative and strongly correlated fashion, which is a bit more. The Goodenough Draw-a-Person test is one of the most reliable and effective measures of a child's intellectual development. Children's drawings otherwise evolve in a rather universal way, first the face only with members popping out and then the body.

Regardless of the performance aspect, either intellectual or artistic, this is most importantly a fun and endearing activity, which calls for many variations and even collaborations (from simple coloring to the Monster Engine's real artistic renditions, passing by old-style type of collaboration). We have been fortunate enough that Julia expressed a very early interest in drawing, and spends a considerable amount of her time with a pen, marker, paintbrush or anything that leaves a trace (more often than not on supports not supposed to be a recipient for her inspiration of the moment). In this page we maintain a small selection of some of Julia's drawings. You can also see Julia drawing directly.

In Wolverhampton, we took up a Wolverhampton paintings (2019) to paint different landmarks with two notebooks, side by side, in the street.

Drawn upside-down (maybe so that Elena would see the drawing since she was facing her, though it is known some children start drawing upside down) on 30, April (2017), in la casa de Asturias (2 years, 4 months): 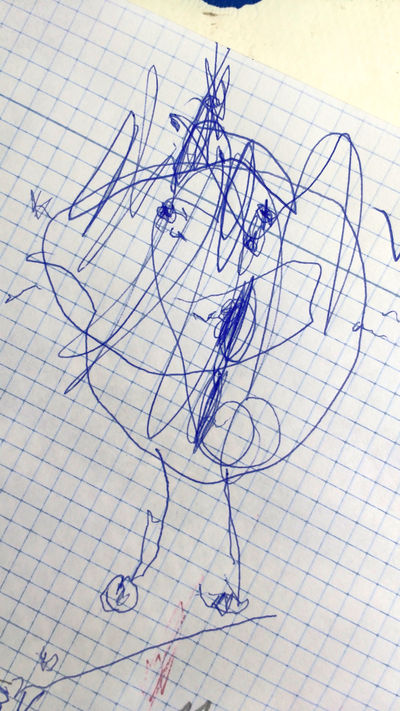 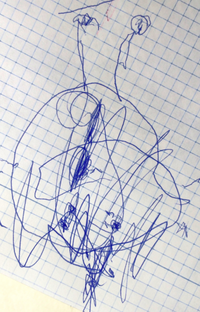