Initially titled Day 6, a much better title in my opinion, mother! (no capital letter and an exclamation point) is a movie masterpiece by Darren Aronofsky, depicting the main story of all stories: man meeting God. 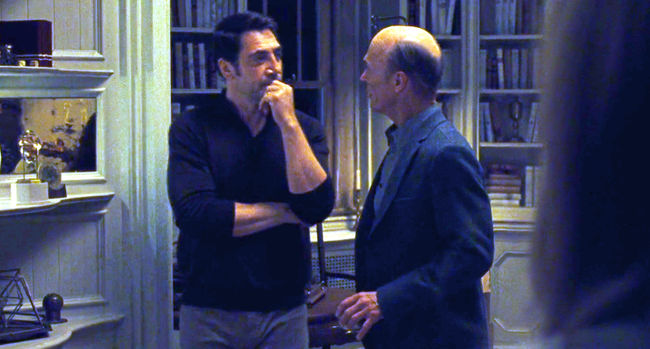 You are not supposed to know that in the first place. The movie begins with a quiet awakening in a comfy bed of a peaceful house in the countryside. You quickly get used to accompanying the every steps of the beautiful main character. Then you're startled by the imposing and towering personality of a new character that seems to pop out of nowhere, and who is as charismatic as he seems to be mysterious and elusive. And in this universe of mixed harmony and frustrations, in a house that gets troubled by the gall of cheeky visitors, at some point you get the Revelation and what a nice trick to involve the audience a sort of apostles who have to get the message: this is Genesis, this is God having some broken relationship with Man and Woman, this is Cain spilling blood on us all. The story goes as fast as the bible, you're still pondering on the why and how of what just happened and everything has escalated out of proportion already.

The interpretation one can make of the movie is remarkable because it succeeds in approaching the story from a different perspective where God is a selfish and guilty being. This makes it already unique because such a simple twist on the canonical narrative invalidates the many critics of the scriptures being nonsensical and paradoxical: why God would allow that, why would he proceed in this way, etc.? Well, maybe God is just such an impotent and struggling artist infatuated by his creation, however faulty and shoddy it is, and blinded by the adoration it elicits, however vulgar and misdirected. The real beauty, the real masterpiece would then be Nature itself, not Man who abuses it. But that's what God wants: something to his image, to show off, to feel adored, ignoring and neglecting mother and her exquisite setting which gives the real magnitude to his work (God comments at some point regarding the destruction inside the house that these are just things, this can be replaced).

This different perspective is possible through the character that is indeed typically ignored in most allegorical or spiritual considerations: mother Earth. There was a place left for her in antique mythology, in the form of Gaia, but she has been completely set aside in the Judeo-Christian narrative, which is also something well captured by the movie, where she is repeatedly perceived as an accessory, a servant, if not an intruder, and in general a bare natural resource rather than a respectable being. The movie restores the importance of this central character by either focusing the camera on her, or on the opposite, keeping the back of the head in the front plane, as an observer of the drama that unravels on her scenery. This also allows the central theme of showing God and man's relationship from neither one side or the other, allowing both parties to be revealed in their limitations, faults and responsibilities (or lack thereof).

The setting is mainly Genesis although the movie covers all of history, to end up with Apocalypsis, before starting over. One easily recognizes some of the main characters and events of the Bible: Adam and Eve, Adam's rib, Cain and Abel, the spilled blood, the great flood (with the sink), the birth and sacrification of Christ, religion, human barbarism, profanation and crimes, spillage and raping of Earth's resources. Rather than the original sin, the anchor point is Abel's murder by Cain, with the indelible mark it makes in the form of an ugly blood stain on the floor which echoes Genesis 4:11

Now you are cursed and banished from the ground, which has swallowed your brother's blood.

There are also interesting slight departures, starting with the set itself, of course. mother says at the beginning, when you still don't know: I want to make a paradise. Another nice trick, telling you what it is, without you realizing. The Apple is replaced by the fragile diamond piece on its pedestal, which originates from the previous mother and is the source of God's generation of the Universe, so something outside of his control, somehow, a sort of Natural force that he's using to create. This gives an interesting perspective to this central point of the tree of knowledge. Also, this is not Adam and Eve who are naked but mother, thinly wrapped in a robe that hardly conceals her nudity. The shame of this innocence comes from Eve who rebukes mother as indecent in a funeral. The sacrifice of Christ is of the baby, rather than the 33-year-old man, he is not crucified but killed in almost the same pose by his neck snapping while he is carried away by a rageful mob inflicting him the passion. Communion is depicted as an interesting act of mutilation and cannibalism. The absurd, morbid, revulsing religious celebrations that follow in its wake are another well-rendered insights from the movie.

The genre is classified as horror, and indeed several scenes are difficult to see. The killing of the baby makes a very strong impression which leaves one's nerves shattered. The violence slowly growing out of proportion, from the otherwise polite, learned and civilized first encounter, slowly builds a sensation of revolt and rage in the viewer. The multi-faceted flaws of mankind's characters are well captured: from the insidious primordial female nagging to the brutal first males already fighting each other, to then quickly expand to portray the arrogance, the indifference, the flattery, the provocations, the deference, the looting, the idolatry, the empathy, the crimes, the butchering of others, and about every humane trait you can imagine. A favorite part is, of course, the utterance of the most dramatic line ever:

Both the directing and actors are perfect. Bardem raises higher in his reputation as a timeless actor, siding with the greatest, especially now that he impersonated God in a non-comedy setting, which is definitely the most difficult role to play. Actress Jennifer Lawrence, whose others works I do not particularly know or am interested in, is splendid; the way she plays, the way she looks, the way she is everywhere and all around, she is up to her role that is of making God a secondary character. She can, what a feast, impersonate Earth in her total abnegation, she can convince you that whatever the abuse, there are resources in her infinite beauty to start afresh, she can, literally, gives ground to God, and make him read his mind:

Nothing is ever enough. I couldn't create if it was. And I have to. That's what I do. That's... what I am. Now I must try it all again.

The magnitude of her dedication is illustrated by the anecdote that she actually hurt herself impersonating the character. I am less fond of the other actors, Man and Woman, also famous not at the level of their roles. Ed Harris plays fantastically but his look is just not up to the character. Man doesn't look like that. God, on the other hand, could! Pfeiffer as Woman could sound right and her look, insofar as it evokes that she is more the Snake than the Woman herself, works well, but her acting, to my impression, was not subtle enough and brings you back from a Universe that is Whole to a flat screen.

As for the director, Darren Aronofsky, this is someone to keep an eye on, as definitely of a different breed from today moviemakers, someone with a personal genre and style who is trying new things, who is looking for sense, meaning, for something. Sometimes this may result in rather strange, over-the-top productions, like the Fountain, which really looked like it could have been a masterpiece, a crafted work of Art with many things to say, but that just did not work out so well, in my opinion. The Black Swan was exploring new directions but remained (probably for the good of the movie itself) along fairly classical lines. For mother!, it's a hit on. Unlike the Fountain that took him ages to get through, the director says about what I regard as his masterpiece:

I woke up one morning and this movie poured out of me like a fever dream. All of my previous films gestated with me for many years but I wrote the first draft of Mother! in 5 days.

Which is a sure proof of Genious and a demonstration of divine inspiration. The public seems to have polarized opinion about the movie: many find it incoherent, confused, revulsing, but isn't that the point it tries to make? You do get these feelings if you have the chance to see the movie without knowing what it is about. And when you understand it, everything makes sense and you are at peace with the work, however unsettling, atrocious, disgraceful, shameful it can be. Because the intellect then overcomes the mere observations, the anecdotical (and indeed often unsettling) details, to reveal a wider picture. At such, does it not succeed in making what it aims to be: a poignant metaphor of life itself, to make some sense out of something which, at the outset, doesn't seem to have any? It does so especially well if you believe existence has a spiritual, or even more specific, a biblical dimension.