If you want to know what God thinks of money,
just look at the people he gave it to.
Dorothy Parker

We leaved for several years in the UK on two salaries, with modest tastes for luxury and comfortable (but by no mean high) salaries. When we left the country, we had to transfer our savings to €. This was as close we got to playing casino. It's a feverish game. You have to close the deal with the bank at the second. This happened to us at a time where the currency was fluctuating a lot with an overall tendency of free-fall. On the somewhat bulky amount we were playing with, this implied variations of several hundred euros. It was debated a lot on the specialized forums on line whether the thing will go down forever or if it could only but get sharply up again after getting to such historical lows.

These are the graphs illustrating this frenzy:

The power of information and knowledge. This is a local view, below, of the months when we had to make this transfer. We were not very lucky as we had to take the decision within the depletion area of an otherwise fairly constant background. If we had ordered the transfer on November 30 instead, where there is a local maximum in a time slot still conceivable to have arranged it, we would have got around 1200€ more, a full month's rent in Munich, where we now were leaving, happily oblivious of the matter. 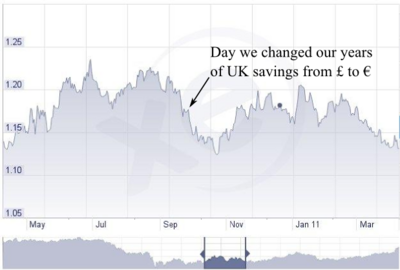