Manchester is a city in the north of England, nearby Liverpool. 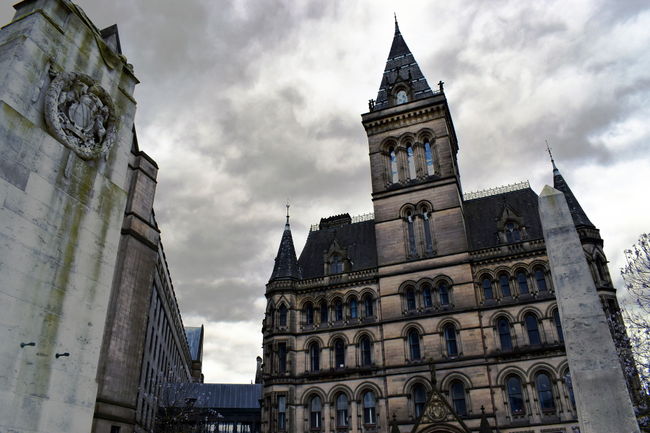 One of the highlights of Manchester—the Chetham's library—stores Robert Southey's Letters of Espriella in which he comments about Manchester that ‘a place more destitute of all interest is impossible to conceive’. The city does not seem indeed to make much of an impression on many, but it still has several claims of importance and historical relevance, starting with being the world's first big industrial city (with the textile manufacture). Today it remains a global city (where it is classified as β- while Birmingham for instance is only γ+). Its architecture is of varying quality and it is not the most pleasant city to walk around. It has some nice brick buildings, including the Midland hotel, an impressive Edwardian Baroque building, where Rolls & Royce met to form their company. It was also a favorite of Hitler who knew it for its architecture and this area of the town was allegedly spared bombing not to damage it. Still, Manchester seems to exacerbate urban loneliness melancholy. A Frenchman artist, Valette, who for unknown reasons found himself living in Manchester, painted the city with impressionist strokes that capture this atmosphere in a way that not even the museum can conceal. In the description of York Street Leading to Charles Street (see also below), the explicative panel reads: Valette has made the train very small. The resulting distortion of scale adds to the feeling that city life weighs heavily upon the foreground figures.

Chetham's Library might be the most important spot of Manchester. Founded 1653 in a 1421 building, is the oldest public library in the English-speaking world. It holds over 120000 volumes of printed books an other documents. Unlike the time of Chetham, would instructed ‘to require nothing of any man that cometh into the library’, its visit is today strictly regulated.

Marx and Engels used to meet there, in the window seat that you see on the left in this picture above, where they developed the Communist Manifesto. In a letter to Marx, Engels remember:

During the last few days I have again spent a good deal of time sitting at the four-sided desk in the alcove where we sat together twenty-four years ago. I am very fond of the place. The stained glass window ensures that the weather is always fine there.

The stained glass is gone but the rest stayed there. The guide also mentioned a meeting of Cromwell on the roundtable, but I could find no other mention of that.

Manchester's Art gallery hosts several works of international significance. I discovered there Joseph Farquharson whose work with light made him an instant favorite painters of mine, along with Kuindzhi.