KDE is a great desktop environment suite, with two big assets from the start:

The latest generation, kde4, however brought us backward and things are only slowly recovering. It started full of irritating flaws, ludicrous loss of functionalities as compared to older versions, cast in a pompous and useless design that makes it painfully slow.

A typical atrocity is that instead of konqueror as a universal browser (a sort of emacs for whatever goes beyond text-editing), konqueror is now relegated to mere internet browsing and an atrocious so-called dolphin takes over for file browsing. This is a terrible mistake and a sacrifice of the great kde insight of a universal browser.

Overall, it is somehow of a recurrent trauma that each upgrade brings changes to habits so dearly enforced for decades that they became traditions. Any little change counts. For instance, I didn't like reading this:

ksnapshot has a leading 'k' to what it really does. What is this "spectacle" nonsense instead? I installed it so many times that I now have a ritual of setting up a kde environment.

Below I list some problems and, whenever possible, a fix for them.

I use keyboard shortcuts a lot, for instance, lw in krunner brings me to this web (like wp does for wikipedia or gg for google). This you can get with in Web Shortcuts:

This is an example of a Custom Shortcut to enter a <pre></pre> tag:

You can see all my shortcuts for more sophisticated examples.

If you have a better solution, please, contact me.

You can't completely get rid of it, everything being interconnected. You merely want it never ever to pop up. Enforce konqueror as file browser in System Settings > Personal > Default Applications > File Manager.

See this link for how to lock zoom when scrolling between images: (invaluable for a scientist)

A convenient feature of konqueror is to embed a terminal inside (at the bottom) so that you can work from a konsole into the content of the displayed folder, neat. This is different than opening a separate terminal. When working all right, these two different features appear as such:

Sometimes the second one is missing and most fixes on the internet propose something else (linking it to the shortcut F8 for instance, the problem not being the shortcut but that the very option is not available). It appears to be a bug because that typically is possible from within Dolphin. It seems that installing the package "krusader" enables it back.

This problem that affects gtk applications is almost bearable as gurus don't need to see what they click on to know what that does, till the point where even guessing is not enough, at which stage it is too late to retain your sanity. That's an example of the issue: 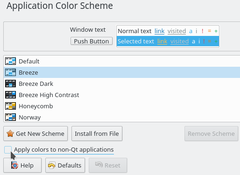 Some people suggest to hack a ~/.gtkrc-2.0 file [1][2]. However, this can be simply resolved by ticking the "Apply colors to non-Qt applications" in System Settings→Colors, as shown above, right.

If there is a bug with shifting virtual desktops (that persist in fading despite the option "no animation", which can be very annoying for people constantly shifting screens) then bring "Animation speed" to 'Instant' in system's settings "Display and Monitor".

This is a bug from gnome. Go in Settings, Application Color Scheme, Options, and untick "Apply colors to non-Qt applications" (could be non-kde4 applications). It should revert to a readable white onto black.

Play a video in minimal mode

If you want to keep a video in so-called "minimal mode", meaning you only display the video with no borders, no menu, no status bar, nothing, then use Kaffeine. Enter and exit this mode with "." and use Alt+F3 (More Actions->No Border + Keep Above Others) along with pinning to all Desktops, if you wish.

Developers don't want to implement this feature~[3] for Dragon player, although a patch is available~[4]. MPlayer is also an option, especially if you want to launch videos from YouTube through SMTube. Use "T" to toggle "Stay on Top". Gnome MPlayer does not even remove the menu bar~[5] so use MPlayer instead.

No more a problem

Things tend to get fixed as time goes on. I keep the list below for my records, but they should not be necessary anymore.

There was a comfortable, powerful manager of hotkeys in previous versions of kde. Now it's rubbish. For most things, you have to edit the following file by hand:

An important thing that I refuse to negotiate about is circulating through virtual desktops with the keyboard. This is achieved with the following lines:

The same but grabbing a window as you go along:

What are yours? Here's a list of my favorite settings (in case I forget them myself, which is always the case when I upgrade and find the computer not obeying my thoughts anymore).

Details of preferences can be found in my Ritual of setting up a kde environment.