This page is still in progress.

Entrepeñas is a Spanish embalse in the province of Guadalajara, that we visited on a campervaning trip on 6-8 May (2022). It is part of the so-called Mar de Castilla, which includes this and nearby reservoirs, in particular that of Buendía. 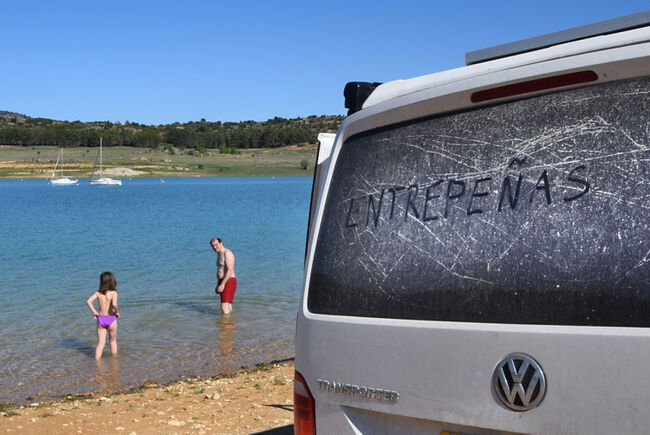 The embalse, i.e., the body of water formed by the Tagus trapped on its way to Portugal, was the highlight of the trip. We went around, above, inside. It was our first bathing for this year following the winter break. Waters a bit too cold to swim for a prolonged amount of time, but nothing that could kee Julia out. She even volunteered for a midnight dip but mom did not allow that. We tried to have Luz also put her feet but she herself said "no no" after touching with the tip of a toe.

We arrived Friday evening on the best and quietest possible viewpoint on the embalse, namely, la Ermita del Madroñal, a XVIIth century hermitage. Its name comes from the fact that the Virgen's image kept appearing in a Madroño until the ermita was built on this spot... at which points all apparitions and other miracles ceased, which makes you wonder why the construction was even undertaken in the first place. It is perched on the flanks of the embalse on a hill known as la Veguilla. 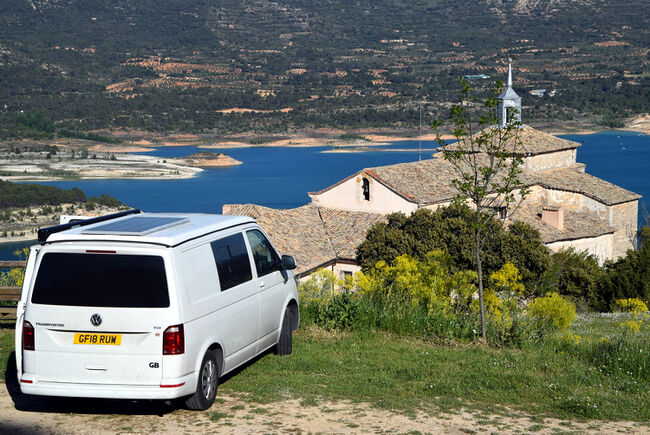 It offers wonderful views of the Tajo as well as a quiet retreat. We just stayed there, playing and reading. I started to read one of Giono's masterpiece: Regain.

Auñón is a small, now largely deserted, village from the Provincia de Guadalajara.

It is connected to the Ermita del Madroñal, so we stopped by. In his great dictionary of the Spanish places, one can indeed read that Auñon

After a quick tour, we met a local who told us about the desertification of the place and how this was a pithy, because of how great it was, in particular recommending very strongly that we visit the swimming pool. This made it difficult to separate the literature from the exploration.

Between Auñon and Sacedón, and after the dam—meaning, where the river is let to pursue its route as a thin thread of water leaking from the embalse—there lies a beautiful romanic bridge, which used to be a major axis of communication between Cuenca and Sigüenza, known as the Puente Romano although it is Romanico. It was also the center of a battle between el Empecinado that resulted in a French defeat, with them fleeing to Auñon. One gets access to it through a beautiful road carved below the rocks, that are falling on it.

Sacedón is a small town by the embalse de Entrepeñas. 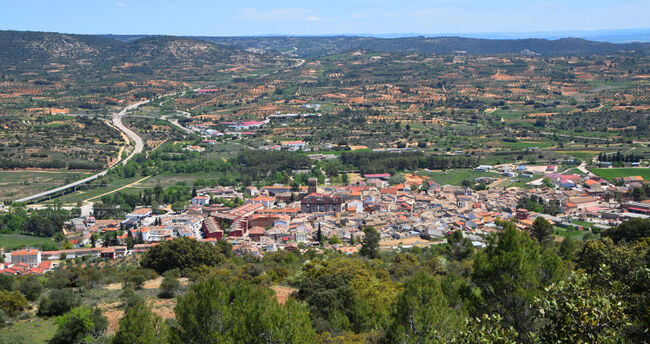 At a distance, in particular from the Ermita del Madroñal, Sacedón appears to be an island of civilization in a precarious equilibrium amongst both the arid Castillan vegetation and its opposite, namely, flooding waters, that spared this place unlike other ones more valuable, like the Real Sitio de la Isabela that got engulfed. This makes it an exciting destination, especially when reading Regain, as a perfect illustration of the fight between man and the natural elements or those, more pernicious still, unleashed by his own hand. In reality, however, the place is much more prosaic. While it appears to undergo the slow process of desertification, with places as central as the one facing the main church, falling to pieces, it also appears to keep a burgeoning and mysterious activity from bikers, that join together at the bar de España in a continuous stream of customers. We joined them for an unlikely order of a coffee (for Elena) and orejas (for Fabrice), everything being, besides, delicious. Are there things that bikers know that others do not?

Following the Tajo from the arid basin into the woods, towards Nuestra Señora del Socorro, one meets completely different sceneries of a mighty river flowing through a thick forest. The spectacular view of the Castillo de Anguix is the crowning sight and reward for the difficult way, even by car.

The Embalse was the central theme of the trip.

Even the panorama above, from the Sagrado Corazon de Jesus, cannot embrace all our stops. On the left is the dam, beyond which is the romanic bridge and the beautiful road that leads to it. From a mirador nearby we had the first bath with Julia. One can make out the Ermita in the flanks of the mountains. At the center is the Entre-Peñas part that we walked to arrive to the boca del Infierno, coming back by the Via del Lucio, a canal riddled with holes. On the right is Sacedón and Auñon was also within sight. The part of the embalse on the right is the one by which we spent the evening, night and next morning.

Pastrana is a ducal town that witnessed the confrontation of two strong-willed ladies of opposite tempers and inclinations: the Princess of Éboli and Teresa of Ávila, also known as Santa Teresa de Jesus. It ranks today among the most beautiful pueblos from Spain, although in this case this is better appreciated at a distance. 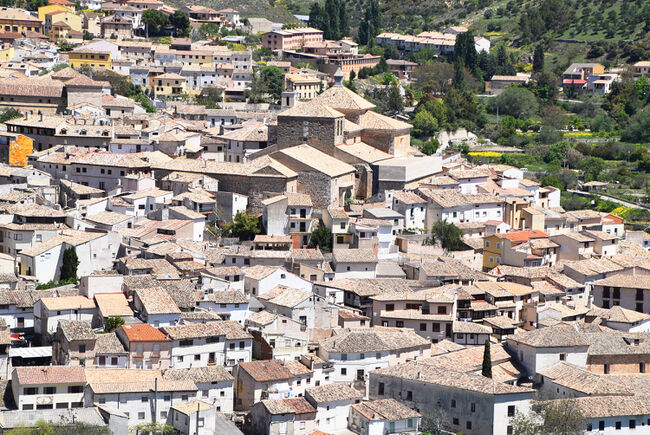 The city is legendary as the battleground between Ana de Mendoza, the legendary Princess of Éboli, the one-eyed mysterious beauty, and Santa Teresa, the founder of the Carmelitas Descalzos infamous for the Bernini sculpture of her ectasy. The princess was imprisoned in her palace but with the option of going on the balcony for no more than one hour everyday, the reason for which the square that was her universe all this time is now known as plaza de la hora. This was due to a quarrel with Felipe II, however, not with Teresa, who took away all the nuns from the city in her fight with Ana who was having a much more relaxed understanding of what constitutes monastic life.

The city itself if, of course, very nice, but its truly marvelous views are from the miradors, from which you can enjoy the medieval piling of roofs. We visited two, one nearby, within walking distance, la ermita de San Agustín, warmly recommended to us by an abuela who observed that this was "perfectly within walking distances" ("se puede andar perfectamente"), which was true although very steepy. As an obviously knowledgeable person, she pointed out the portada preciosa, which was indeed to be noticed. Unfortunately, between Pastrana and its views from the Ermita, stands, isolated, a disgraceful little house.

Walking in the streets, we stumbled upon a nice-looking restaurant, el Cenador de las Monjas. We first ventured inside for a better view of the hall. Someone attended us and as we asked if we could have a table, with no reservation, he said that today was very quiet so it would be no problem, but that we had to come back at two. We did, at which point the same person asked us if we had a reservation. When we mentioned that we were the ones coming back, he told us that this was fine but just a moment please, and had us wait in the corridor as he was greeting other people coming behind us. Maybe they had one of these reservations that were not necessary. It was not annoying but mysterious. A first mystery. The place itself was very nice, with beautiful paintings of the Princess, but the real enigma is the high reputation of the place, that even, apparently, earned awards, and the actual food which is, at best, average. The restaurant is indeed highly praised by critics who place it as the best one in Pastrana. There are only a few severe reviews, with which, however, we concur totally. There is a clear ambition at pausing as a gastronomic restaurant, with a clear effort in the presentation, but any random meson by the border of the road does better migas and the university comedor cooks a better secreto iberico. The sly smile of the Princess looking at us from her paintings was tearing us apart with another inscrutable mystery of Pastrana.