For the Easter break, we decided to start exploring our new surroundings, around Wolverhampton. As we were visiting with Julia and Camilo, both already well accustomed to England, we decided to go to Wales, our new neighbour. This is a short account of this expedition.

Chester is not in Wales, of course, as it is a good kilometer away from its frontier, but was on the way and a must-go destination in any case. So that made our first stop. Weather did not allow us to walk round the full city walls, but going up and down the main road was already something, with these incredible timber houses, maybe the largest we've seen so far (there's a massive one in central London as well, the Staple Inn, but I'm not sure it comes as big as what they could preserve in Chester). The Cathedral has the same colour as our Saint Peter.

That was on the way as well, as was Saint Winefride well, but we couldn't go to both as we had spent so much time at the Chef's table in Chester. The Duke of Lancaster is creepy. It's really worth going if you have the guts to break in. They say it's no end of mysteries in there. There was some plans to turn it into some hotel or nightclub or something else admitting, but it's probably too scary. That was our first contact with the very muddy seafloor, though, where water is more like rainwater left over than the actual sea. We didn't get to see the three monkeys, that are on the other side of the ship, as we were pressed by time as the parking had a closing time which we were not sure was not actually valid.

Conwy is fantastic, it is to UK what Avila is to Spain, except that it traded the sun for the sea. The medieval walls are impressive, and these ones we could walk at our leisure, getting views of the castle, the hills, the clouds, the sea and the rest of the walls each one nicer than the previous one, with this majestic feeling you're flying over. We encountered what claims to be the smallest house in Great Britain. That wouldn't be a big deal for us but interestingly, Julia turned out to like this a lot and was reluctant to leave. Strange... what was so appealing to her? It wasn't so small as to look like a doll house. I probably wouldn't have noticed it if not for the sign, which for sure did not influence Julia. Then, in our prolonged interaction with this little house, we realised that we were in UK and that after 19.00 it becomes close to impossible to find any place to eat. In Conwy, that means also the Fish and Chips and these sort of places. The restaurants still open were fully booked... we managed to find an Italian place on the central square, very hot and humid from the crowd, but wine and pasta need no more refine accommodation.

On our way to Bangor, we stopped at this place, because it was so beautiful. We climbed up the mountain, had a look at the sea and the myriad of paths crossing each others in mountains or hills of indefinite colours, and hurried towards Bangor, our next programmed destination, because this impromptu stop was actually a few minutes away only from Conwy, and there was still some route left to go.

Bangor was not as nice as we expected, although we came primarily for the Pier, which was indeed up to our expectations, as a long dash over the sea almost making it across to the other side (which is not Ireland but Anglesey). The city still has various elements worthy of a stop. The old University, perched onto a hill, the Cathedral, with an important Christ (the Mostyn Christ ) and an interesting modern depiction of a doubting Thomas (whose Thomas, I found, had an uncanny resemblance to myself, especially if you'd seen me over ten years ago when I had a leather jacket, short hairs and a pretension at a piece of beard). Camilo, who has an acute sense of humour, found this street very funny 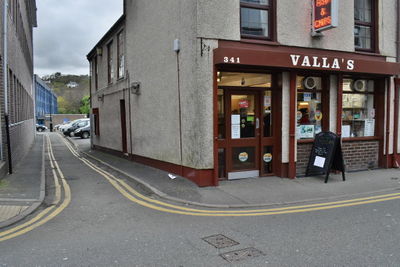 , because (if you don't get the joke), it's remarkable how they should prohibit to park on any side of it when it obviously doesn't even accommodate a single car to pass through anyway. While he was laughing out loud each time he would return his gaze to these too ridiculously approaching lines, I got to read the bits of News displayed by the shop, Valla's (which is not for sale), that turned out to be some sort of local favourite, with historical roots (and nice pictures from the family in the old times), a secret way to fry and prepare the batter, and even some celebrity (whom I didn't know) who wrote a lengthy piece in the newspaper to explain how this was the best Fish and Chips in the World. All this was enough to have us in and taste, for me who took the most complex composition, a bit of everything (with beans, tea, fish and chips) for some 4£ something. The experience was not incredible from the gastronomic point of view but certainly was a nice Fishy experience for Camilo, in this city whose pavement tells you how the Beatles came for a visit in 1967.

Then we crossed to the Holy Island (this is a nice feeling to go from one Island to the next, each smaller in side than the earliest, something we're striving to experience with Staffa). We started our exploration of this tiny island with Beaumaris, of Saxon fame. It has a very nice castle, which was by far the highlight. It also has one of the oldest house of UK, but since it failed to impress Julia this time, we suspected this wasn't true.

Then in Holy Island, we went for the coast, which is the most beautiful. There was the option to spot puffins there and if I remember well they even flagged two as sighted "earlier today" at the observatory, but of course we didn't get that chance just there and then. We walked up to the highest spot, which was very windy, although you don't see that in the pictures. We could see how small indeed is the land. We doubted seriously that we had Holyhead in sight, a few kilometers away, while it took us so long through the road to reach the South Stacks. We had to complete the loop under heavy rain, improvising a protection for Julia out of my several layers of jackets. We don't have photos of the ending, which was epic. We then went around with the car, observing once again how tiny is the island... we crossed back and forth to Anglesey, eventually passing through all of its three bridges.

Now on our way back, we made a stop in the Snowdonia natural park, which is one of our destinations for Hiking the British mountains and hills. There it gets as beautiful as in Scotland, except that it's one hour from home rather than five. Julia did a bit of walking on the last part of the route, pioneering her future hiking adventures. This is so beautiful that we can let the pictures speak for themselves.

We went round Wrexham in the morning with the raising concern to have been trapped again in the dead-service British society on a Bank holiday or outside the thinly specified hours, and were fearing for our breakfast but, incredibly enough, in the completely deserted city, we found a coffee open. There were more people in the Church (they got slightly disappointed that we didn't stay for the service) but otherwise a real feeling of post-apocalyptic silence in the streets. Wrexham is a big city to be that empty.

We concluded our trip in the beautiful Llangollen area, that is graced by the inputs of Telford, an engineer probably little less genius than Eiffel although far from having gathered as much fame and recognition. Well, to be fair, a city is named after him (and is the fastest growing one in UK). One of the big achievements of Telford is the Pontcysyllte Aqueduct, that carries narrow boats over the valley, although I fail to see the purpose as they stop there anyway. We also paid a visit to the beautiful Llantysilio church (there's another one with this name on an island when crossing to Anglesey). We had tea with some tarts and "pickles", of which we probably took too much, in the scenic Berwin train station, that regulates steam trains used for actual transportation rather than mere tourism. There was a last spot of importance to see, the Crucis Abbey, which was not entirely straightforward to locate although Camilo could narrow it down from a combination of instructions of the Berwin lady and some running. This was a beautiful stay that reminded us of our British heritage days, when we were collecting ruins of this type throughout the country.

Our final stop was Llangollen, where, after a stroll along the river, we got ourselves a table at the proclaimed oldest wine restaurant in Wales... why not? Food was very tasty, a perfect ending. While we were waiting for the bill with Camilo, Elena went to install Julia in the car. Shortly afterwards she came back hardly containing a panic attack... The car had self-locked itself with the baby in the seat! This is a most unwelcome feature of these models—it was a rented car of which we didn't know this specificity that after a little while, if you didn't lock it yourself, it does so by itself—and Elena had left the keys inside. After slamming the door to go round, she realised she had no access anymore. We asked the restaurant to call the police, which, amazingly, told us there was nothing they could do, and that we had to break the window. That is, by ourselves... with a stone or whatever, I don't know. Given that Julia was not worried or bothered, this failure from the police to do anything, not even showing up to arrest us, let us time to realise that, inside with the keys was Julia herself. Granted, she was tied already by the security belt and the chances for her to free herself and understand the instructions to pick they keys and open the doors were slim, so I was already looking for a way to crack the car open. But, even more amazingly than the police advising you to break a window in the street (even if your car) with a child inside, was the fact that Julia could actually understand that we wanted her to get out of her seat, untie the various types of belts, which she did with many efforts and repeated attempts, a bit like these artists loosening their chains under water, and then grab the keys, at which point, it was obvious it was a piece of cake for her to have her press the button. She did all of this, not getting scared a single moment, only sometimes complaining no puedo but still trying, and when she finally released herself, all of us at once opened the doors, incredibly relieved and back together with our little hero, who already freed herself from a nontrivial danger and saved us a lot of hassles.