For our sixth campervanning trip, we recovered campercita from Dudley where it got a few fixes and the installation of solar panels, a tank to keep the grey waters (that British apparently drop as they go) and a converter. We then decided to plan the rest of the trip southward (we had wanted to visit Ludlow at this time). The highlight were the Clent Hills. The trip was otherwise notable for repeated night incidents!

We spent the first night in the parking of the Hills, but due to the proximity to Birmingham, it turns out to be a place where people come to race in the night and mud, honk, or attempt to burn their car by pushing simultaneously the brake and the accelerator. This was a bit worrying as we could hear the cars squid round us. Julia, however, slept undisturbed through this display of idle imbecility (even though we were sleeping in the upper part). 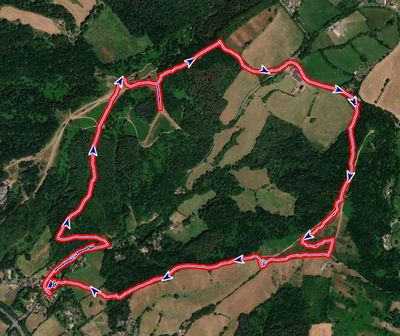 We spent the second night in a spot which we found on our way, looking for a nice place to stay. The location was wonderful, with a beautiful manor (pictured below), a cottage—both named "shell"—and other nearby properties of exaggerated luxury and wealth. The best part was however the ford, which one has to cross through. We also got a good fright later in the night as someone parked on the other parking spot and was using scissors to apparently scarify their legs, which decided us to leave, although they went before we could get ready to depart (possibly unaware of our presence), so we finally stayed. We tested the campervan's newly installed converter there but with little success as Theseus's battery quickly drained the battery.

We started our visit with the pretty Saint Mary's church, standing on a hill isolated from the village. We had planned to visit Hanbury hall from the national trust, knowing it would rain, but for some unknown reason, the national trust is in the habit of closing part or all of its properties without notice and in contradiction to their web information (you figure this out only when you arrive on-site) so in our case and on this occasion, only the ground floor was open to visits. The whole area permeates of the Vernon family, which ringed a bell but we could not quite make sure where we had met this patronym before, only to realize later on they were linked to those of our previous Sudbury trip (two trips and three weeks ago). The styles of the two houses are not entirely dissimilar although Sudbury Hall is more impressive, and none is a match to Aston hall.

We had our last stop in the park of Himley Hall, walking by the lake and getting up to the bridge. The Hall itself, although the prettiest sight, was not opened to visit at this time. It was extremely muddy. There were a lot of geese and coots which brought much melancholy to the damped scenery.