Our Sunday 22 January (2023) was devoted to the first part of a famous and favorite escape in History, that of Charles II fleeing Cromwell's parliamentary rule [1]. The story is famous because it was successful, is "rocambolesque", probably changed the course of history and is also well documented, with the king himself recounting it several times and accurate commentators of the time, such as Samuel Pepys, having kept the details for posterity. 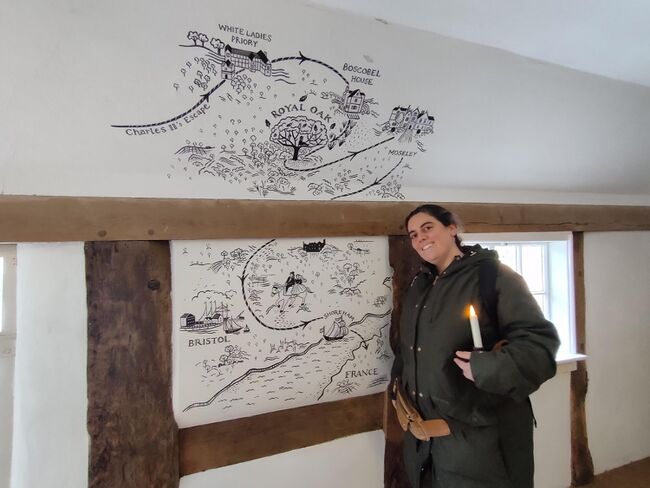 The journey involved interesting characters, such as Lord Wilmot, who refused to hide in the escape and proudly rode openly half a mile ahead of the group, with no disguise, while the king would alternate costumes from being a farmer, a country-boy and even a female aid. The Monarch's way also commemorates the route taken by Charles from the defeat to salvation.

At the crux of this escape is the Royal Oak, the tree in which the King hid in a very close encounter with his trackers. This is the highlight of the place, more than the building itself which is Grade II only, and this despite the original tree itself being long time gone, having been destroyed by tourists cutting off branches and chunks as souvenirs, but to their atonement, from the 17th and 18th centuries period. Today's tree is a descendant (planted from an acorn of the "original"). Today's Charles (as a prince) planted the grandson of the Royal Oak. You can also get your own sapling from the Boscobel house. The Royal Oak is the third most common pub name in Britain.