This is the record for the first five days. 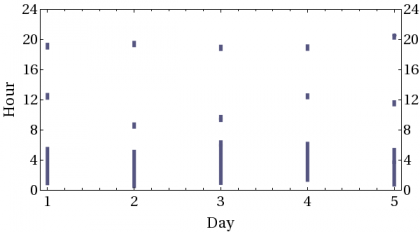 It is a bit difficult and/or uncomfortable to hold to a strict adherence for the timetable of the two short power naps, but these can be moved around a bit in the everyman to accommodate a meal, a meeting or other obligations in the real world. It is also sometimes uninviting to go to bed, even if technically possible, just because one would rather keep enjoying using more time doing something else.

In the whole process, the most difficult (for me) is the period just after the large sleeping slot. It was particularly difficult on days 2 and 3, but became easier from then on. Advancing the first power nap would enhance the situation considerably. The periods after the power naps have always been very good, with no sleepiness and no hard feelings. I never had any problem to fall asleep.

Thus, the main difficulty, as far as I am concerned, is to get awake from the large slot, which, as I have already noted at the beginning of this blog, has always been a tortuous passage into the day for me. This can be tamed with a premature power nap.

Another difficulty, not documented there as it occurred on the sixth day (which is still ongoing), is that if the mood goes down—due to difficulty or lack of progress in work, for instance—there is a terrible load and it becomes extremely difficult to find energy, will and resource to get out of bed. This, however, might be an independent problem (keeping high spirits even in demanding times). Power naps on the other hand also offer a welcome break in this case.

I still don't know how far the scheme can be continued but apart from technical complications in keeping the schedule and not preferring peace of mind and comfort of a warm bed, I see no evidence it cannot be sustained for arbitrary amount of time.