Real Madrid vs Borussia Dortmund at the Santiago Bernabéu Stadium

We attended a match of football from the 2013–14 UEFA Champions League in the knockout phase, opposing the Real Madrid to the Borrusia Dortmund.

We took advantage of the fact that we currently have two aficionados in the group, William and Camilo, to attend one major event of an important tournament in a mythic stadium, the Santiago Bernabéu Stadium. We made a thin attempt to witness these Ludi of the modern age at the Allianz Arena in Munich, one of the most recurrent sight since it laid in the middle of hour home in Garching and the city, but it turned out to be both complicated and expensive. Our moderate interest into this made it a lost occasion. Here with our friends finding the tickets and selecting the best match, the best seats, the best everything, it was only to pay cash. It's absurdly expensive, all right~[1], but as my mentor used to say: you either loose money or waste it.

The game was rich in notable features close to football historical proportions:

It was peculiar to see how it all unravels, fast and with little actual ceremony, especially after the game, where the players just leave and go home (or wherever these people go). I was also shocked by the amount of coverage this all gets, in particular in the press. I'm not speaking so much of the cover photo of the star players shouting in joy or frustration, but the commentaries (which appear to comment always the same thing), the analysis, etc. We know as little about football as it is possible to, since we both ignore it religiously in a world where it is otherwise exceedingly present and advertised. Even if it was easy to imagine that the actual subculture that clings to it is huge, we were still surprised to discover the actual importance that is given to what remains a mere sportive encounter. Here you have one of the visuals to summarize (for whom) a development of the game: 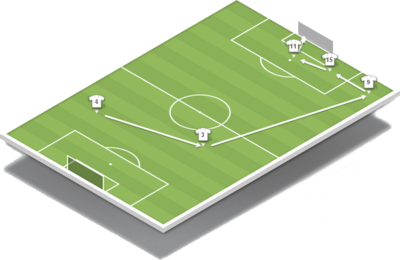 This was for a goal, but the same exists for every single action of the entire game. The post-analysis of the game is thus probably more profound that much that is done in science where this sort of fascination and obstinacy would be welcome and useful. The map below, for instance, shows the overall presence of Cristiano Ronaldo on the field, during the whole match. You can also separate this into the two periods and see the corresponding statistics for each and every player: 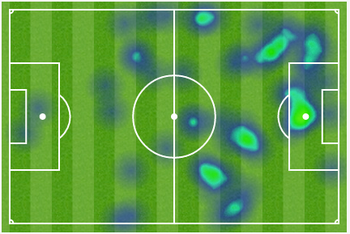 These are some pictures I took during the event (Camilo also attended but he didn't came out neat in any of them). See also this keek.