The dawn of Google+

Google started, less than a couple of weeks ago(i), a revolutionary service: its social networking platform Google+. Of course, what it looks like at first, is that it is just a variation of facebook [1]. 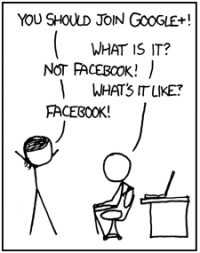 Given that critics have been extremely positive about the product, newcomers often get puzzled: what is so cool about something which is like... finally, an empty facebook?

For facebook is full of people, estimated at 750 millions at the time of writing, and not only does it have all your techy friends, it also has the other friends, the computer illiterate(ii), and beyond that, also your parents, grandparents, sisters and their children, the whole family.

And people love this, of course, because it's nice to see pictures of relatives or to know cool (or bad) places, bars, museums, etc., they go to. Some people get sick of it, but they are just not growing with their age. Newspapers, trains, the radio, etc., also made this class of people sick when that appeared. This evolution of society was even foreseen by some visionaries (see h2g2 for instance). It's in the utopian picture of the technologically oriented world. There should be such a thing, there is no question about it.

Now, if it took years for your dad to "get his facebook", how is he going to migrate to G+? Or for that matter, why?

That is the major asset of facebook. It has seven years or so of advance, that is, in a field that grows at the speed of the internet, an eternity. It's hopeless to overtake it, unless it collapses by itself... or unless you're Google.

I don't think facebook would collapse by itself, although I think it is rotting. Still the mass of people, which is the market here, has propensity to accommodate itself to shit that goes from bad to worst at the rate of putrefaction, to accept all sorts of abuses, low quality and even degradation of service, to be flooded by aggressive advertising, to endure all sorts of scams, confidence tricks, bribery, bullying, intimidation, theft, copyright abuses, etc. I've read recently facebook is about to launch "facebook money" so that the mass can start paying cash for all the silly apps that circulate around. The list could go on forever. Facebook is essentially an evil product.

It's an evil product based on an obvious, natural, genius idea, that of social networking. Something a technology-oriented humanity wants and needs. Something that will be as natural in 20 years than a book or a fork appear to be now, so common, nobody would even question the concept.

That's why facebook is so popular. It did something that had to be done. It filled-in a gap, everybody rushed in, now It has the monopoly.

I should rather say, it had.

That's where Google will save the day. I'm not going to list why Google as a company is way better than Facebook Inc., I'll keep it to their "you don't have to do evil" motto [2]. I'm going to list the key points why G+ is, even at this stage, considerably better than its corrupt and nauseous precursor.

The concept of Circles

In facebook, everything is locked, even what would benefit everybody as a whole. I don't care myself much about privacy, and although it's a fundamental concept, it's not precisely what I'm talking about quite yet. By default, information should flow freely. There should be a Wikipedia, that tells you who Shelton Benjamin is or what are the basics of special relativity.

There should be also somewhere that tells you who Fabrice Laussy is, maybe not the Wikipedia for reasons of notability, but if you bump into me in any given context, you might legitimately want to know more and the Internet is the kind of tool that should assist you in that. This information shouldn't be kept hidden, locked or restricted in any way.

Tim Berners-Lee, the father of the web, wrote a nice article in Scientific American [3] where he explains the philosophy of the wonderful tool he created, allowing interconnection between people. I'll reproduce the parts I like the most:

The Web is yours. It is a public resource on which you, your business, your community and your government depend. The Web is also vital to democracy, a communications channel that makes possible a continuous worldwide conversation. The Web is now more critical to free speech than any other medium. It brings principles established in the U.S. Constitution, the British Magna Carta and other important documents into the network age.

So it's not just a toy or a distraction. The Web is something of magnitude in the sight of history (note that he puts an upcase letter to it).

If we want to track what government is doing, see what companies are doing, understand the true state of the planet, find a cure for Alzheimer’s disease, not to mention easily share our photos with our friends, we the public, the scientific community and the press must make sure the Web’s principles remain intact.

So a lot is at stake, doing the right thing is important. Let's finish off nicely:

The goal of the Web is to serve humanity. We build it now so that those who come to it later will be able to create things that we cannot ourselves imagine.

In this article, Berners-Lee warns particularly against sites like facebook, which "wall off information posted by their users from the rest of the Web".

That is the very first thing that I immediately hated with facebook and that kept me away from it for years, until it became so popular, it was just ridiculous to boycott it. The big problem is: you have to log-in, to have an account, to be a willing part of it.

If I make a search for a friend from the past, or someone I've just met and that could become one in the future, or for a guy who's going to give a talk in the weekly seminar, I'd better hope I don't hit a facebook result, for they will tease me with "this guy is on facebook" but unless you're part of their game, they won't let you see it. That's extorsion, that's immoral, and I hated it from the beginning.

There is below a snapshot of my Public G+ page as it appears as I'm writing this:

You don't have to be logged-in, that's for everyone to see. That's like my webpage, Google is making the Web an open place again.

Now let's come back to privacy. Of course, if you don't want to share stuff with the World, or if the people with whom you interact are of this type, then fine, keep it in a private circle. Herebelow is what the page looks to me, rather than to everybody: 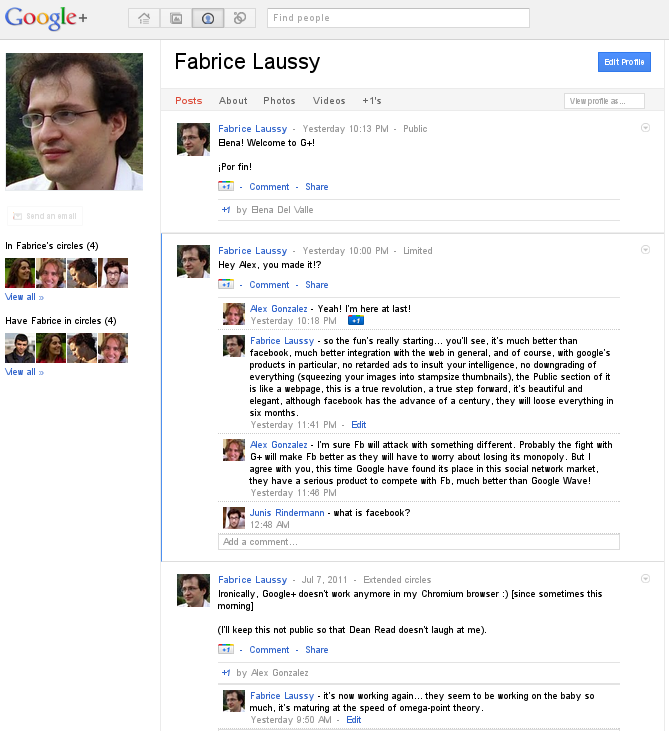 My public Google+ My private Google+

I cut it to the beginning only, not that there is offensive or really private stuff(iii), but you get the point.

There is the first post that you know already from before. The second is "Limited" and shared with the circle of "friends", the last is extended, it would not reach the wide public but anybody remotely connected to me (being acquainted to someone in my circle, by the rule of six links, that makes virtually anybody part of G+). It's not even that I want to hide the information, it's that it appears completely irrelevant to anybody else, so it's just as well to be kept away, to save time... although in case of doubt, I'd rather leave the visitor decide of what is loosing their time or not, rather than I. They know their (possibly sordid) interest in me and my things better than I do.

You don't have to mix anymore the genuine friends with the lunatics you hardly interact with in real life (they even sometimes come from your past) or pile-up your boss or nosy colleagues with your close family and sexual dates.

Make a circle "Coworkers" or "Big Project" and you also have a much more efficient and natural professional environment where to share text (supplementing email), data (images, videos, files), on the fly communication by video-conference (up to ten persons), all integrated with the other google products, maps, gmail, search engines, android... With everything linked to efficient, useful tools, rather than a succession of desolating applications like Farm Town. Here the privacy concern is maximum because maybe you're working on something secret and highly competitive. Again, my personal feeling is there should be no such "secrets". Like, hey, let's hide our research on how to cure cancer, just in case our ongoing ideas make someone actually solve the problem. Ego should have its limits, or if you need credit that hard, turn to politics and conquer continents, you're probably sick... I think it's another google saying that if you're doing something you don't want the others to know about, maybe you shouldn't be doing it in the first place.

But anyway, you've got your circles. The point is, there's the public one, and this one is like your webpage.

I agree with Stallman that creative or deciding people should have their own webpage, where all is 100% as they want it to be, where every link breathes of their own personality, where there is no restriction in their liberty of speech or opinion.

However it's technically demanding and most people who should/would have such a page, usually just postpone it to a receding future, give up or go along with a pitiful, static, immutable, atrophied and outdated page. Google+ (and google profiles, one of the subset of the tools that powers the whole thing) make it possible to maintain a decent webpage. Unless you have reasons to conceal everything about yourself (maybe you are paranoid? or shy to the point of social phobia?), you can now painlessly and with a nice looking result, start communicating with the World. You only have stuff to say to your friends? Fine, keep that confidential. Should you realize one bit of it appears more interesting, more general, well, make it Public, and start broadcasting! You've got a post you want to refer to later, just link to it:

Advertisements is another huge problem in facebook, where everything is squeezed to make profit, rather than to serve a community. There are no ads in G+, at least not yet. There are adds in many google products, like their search engine or in gmail. But frankly, they don't annoy me in the least. Almost, they are useful and informative. Let's make a test: 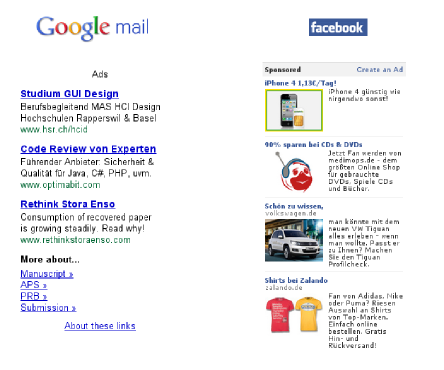 Those are the ads I get in gmail (left) and facebook (right). Gmail is about recycling paper, something I was worrying a couple of paragraphs ago (remember goo.gl/q6AM7?), JAVA, C# and PHP, and some GUI stuff... Even some links on APS, PRB, etc., I wouldn't go as far as saying it's a dream world, but look at what we have in front: aggressive visual images of a terrifying, possibly face-mutilated clown, the type of car I don't stand in the street and retarded tee-shirts for retarded teenagers.

Going further would bring us into the details. The list doesn't stop there, but these are the essentials: a respectful service on the one hand—respectful of its users and of the glorious spirit that gave life to the Web in the first place—against an evil corporative, profit-oriented, abusive product on the other, that took advantage of an insight to exploit society and lure it into decadence and imbecility.