The 46th president of the United States

Joe Biden has been declared the 46th president of the United States. By the media, but it seems to be accepted now that they are the ones to decide, not the legal system, not the court, nor the state and certainly not the current office which gets silenced 40s into their assessment of the situation. Two things scare me there. One is that indeed a considerable power is now in new hands: the media and in particular youtube, twitter, facebook and friends, which are taking over the traditional structure with a separation of roles and powers, with room for dissent and opposition, rather than having unelected, private, obscure but powerful entities decide with a monopoly. It has always been known that they have considerable power and can influence decisively. But now they have direct control. They can silence whomever they want, at will. Second is that people are more than fine with that, they are actually supporting it, fully and consensually.

So now, everything will be better, right? Political frictions, racial hatred, social unrest, climate, covid, even science in general, so tells us, as a summary of a unanimous celebration, the leading journal on that matter: 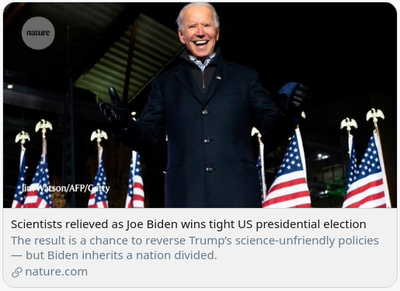 and indeed all scientists I can see on twitter rejoice at the news. The era of fake news is now over, dixit Dawkins:

So great, right? Things will be better, the truth will emerge, reason will prevail. It was all Trump's fault.

I would have said it's my scientific instinct before reading otherwise from Nature, but my first reaction is always to toy with the possibility that things are not what they seem to be. And so I get to see things quite differently:

So what is there to rejoice? Really? Why these outbreaks of euphory? That's my second point above: people embrace their new ruler. Not Biden, the media and the Big Tech. Not even Biden but the heartily-laughing lady will soon enough assume the honorary function of putting a face on what used to be a person in charge and then, since there will be at least some reason to celebrate, people will go crazy again.

My predictions of things that will happen which we would have avoided if Trump had been re-elected, are that we will enter an era with more wars raged by the US, maybe with the EU in their wake, possibly against Iran first, at all rate against Islamic countries and/or people, possibly against North Korea too or some South-American countries, and if things go really banana, against China and/or Russia as well. We will get a slide from the occidental system of government and political traditions, based on opposing trends (like left and right) to give rise to consensus and political correctness, accompanied by censorship of expression, going up to jailing dissenting voices, enforced by a greater control from the media and social platforms, possibly an eventual removal of the voting system itself, at all rates, suppression of debates and contradictions. Everything which is not in direct line with the official narrative will become conspiracy theory, thoughtcrime and result in ostracization, or at least ridicule with pathetic repentances. This will happen, remarkably, even when the official narrative will swing overnight from one extreme to the next: the precise scenario of Orwell's 1984. We already had this with the face masks in France: they went from useless to compulsory from the same mouths and it is only allowed to criticise each version when it came out of favour, but without referring to what was then the official stance. Everybody will be, consequently, shouting in concert their support and admiration for the prevailing dogma. The celebration of Biden we already see everywhere is a first manifestation of that, a North-Korean-looking cult: those who are easily warmed up by the enthusiasm of others will spare no decency in celebrating the dogma. Those with more personal judgement and critical thinking will keep it quiet and limit themselves to merely not-liking the big trend. Eventually, it will become suspicious to even remain neutral. People will have to manifest their thrill as if celebrating personal victories, however bleak or bizarre the object of celebration, as is the case tonight with the election of an old senile creepy puppet in a complete failure of an otherwise basic democractic process. There will also be, clearly, stronger economical stress, a generalisation of poverty, and with that, an increase of social unrest, violence, in particular, racial and/or religious tensions. Private, small, personal or family-lead businesses will be wiped out, everything will be controlled globally. Sanitary measures will always become stricter, stronger and more enduring, accompanied with measures like tracking (through the phone or, ultimately, through a fancy chip in your bottom) that will accompany our final transition from human beings to citizens: machines that are measured, evaluated and monitored constantly. Some people will even like that.

It's starting January 20. Unless the media did not seize control completely already, and that their sentence retweeted ad nauseam is not sufficient, yet, to gain legal value, and that the American people who already had the right intuition to vote Trump rather than the other puppet of the time, Hillary—the warmonger hysterical monster laughing devilishly at the massacre of Gaddafi—chose again the less bad of the two options, and that justice will undo frauds that resulted in this unlikely scenario: the one that everyone wanted because that's the one that the media wanted. But that's a lot of "and" which make me feel we'd better be prepared for a lot of things from the list above and even others, not fathomable, of unseen proportion, to happen soon. I'm writing this only for the satisfaction to see how many of them I'll be getting right.