Per qualche dollaro in più

This morning I filed in a complain at the Universidad Autónoma de Madrid train station, one of the many daily examples where ferocious capitalism raised its head way above common sense. 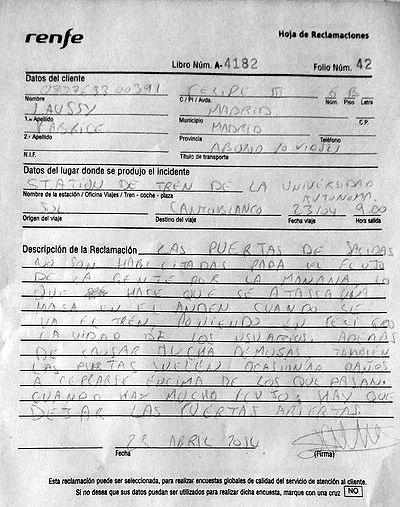 What the text complains about is that in the morning, when affluence is large, there is a massive crowd of people on the platform, that extends as much as possible with a thin corridor between the departing train and the yellow line you should never cross except to board a stationed train with its doors opened. Of course as fluid mechanics dictates, a lot of people actually rush in this hole, at the possible annoyance of those queuing with trepidation. These hurried people—and we can imagine there are plenty of them in the working mornings of students and professors—are thus flirting with death as a beast of steel and kinetic energy accelerates with the full force of its wheels pushing behind the railway and the entire planet attached to it.

The reason for all this is that the Renfe keeps the exit doors of the station closed so that people actually have to check their ticket to trigger a slow, heavy and obsolete abomination of a machine that slides two glass doors that let pass one drop of a person at a time, slamming back to close and, more often than not, actually hammering in violent seesaw motion as the mechanism is confused at if someone else is passing or not. These machines do cause quite a lot of harm if you get caught in their frantic clapping. When they have mashed a victim, they typically get blocked until the operator resets it, which, obviously, makes the pressure of impatient people raising to unbearable levels, especially as this is a daily problem.

Would they leave the doors opened, or better, have a civilized public transport service like in some cities of Germany with no doors in the first place, the flow would evacuate normally towards the campus and nobody would have to give elbows with a boiling crowd and a train in motion. I wouldn't lose like everybody else ten full minutes in the morning, horrified at the sight of daredevils winning ten seconds jeopardizing and entire life, and develop a mild form of trauma at crossing doors with a Pavlovian fear that they will collapse on me.

But the corporations don't care about that. Someone, a quant or another rotten variation of the genre, computed the net income gained by this redundant system and found that, however painful, damaging or dangerous for the end user, the thing came out positive (surely not by much), henceforth, do it.

I have complained many times to many persons in the ticket office about that. Their reply is always the same: "tenemos que comprobar que la gente tiene un tickete de transporte valido" (we have to check that people do have a valid mean of transport). Obviously, it is more important to double-check (people had to enter with the same ticket in the first place) than to take the most elementary measure of precaution to avert one of these catastrophes such as sending five students below a running train in the jerk of a crowd in motion. These recurring man-made catastrophes then turn into scandals as, when they finally strike, everybody wonders: "how could this have happened?" Being so obvious at the outset that all the conditions are met for a catastrophe to eventually, ineluctably, happen. Just give it time and a high enough repetition rate.

Today, I was more annoyed than usual because the slamming happened twice in a row, first to someone before me who extracted himself in rage from one of the door still stuck in his bag like a tooth in a belly. And then to myself who was packed shortly behind. I went to complain to the person in charge, asking him if he didn't see that the doors were jammed. "¿Cual?" (as if they didn't have the whole place cornered with cameras) and then, when I'm repeating my complain on the stupidity of closing doors when there is a massive crowd accumulating as a result, it quickly came to raising voices, as usual, at which point I decided I would do something less hot-tempered like writing down, and filed a complain.

Not against the poor fellow, of course, who looks like a nice, peaceful guy at that, and who is a victim, albeit an accomplice one, defending the whole way it works, justifying that it is absolutely necessary to ensure that not one damned soul in there would have had a free ride (as if the people cheating wouldn't make it through in this chaos anyway). Arguments of this morning were along the lines of: "Hace 12 años que trabajo aqui y nunca ha sido un acidente", "Hago lo que me dice la empresa", "¿Que quiere, que me echan a la calle?", "¿En su país piensa que las cosas son mejores?" and others of the like.

We entered into the argument again after the paperwork, discussing some notions of black swan theory and whether the gentleman would use a firearm if given to him by the Empresa. Regardless of how much I like to shout with someone in the morning, I had to give up because the next train was coming, the next crowd was packing, and we were making a show where, in all situations where someone has a costume, the one without looks like the guilty party who got caught in some fraudulent business. I left with a mention at one of the open doors where a stream of people was happily releasing itself through, mentioning "tenga cuidado, por aqui pasa gente sin poner el tiquete", realizing then that I was only making it more suspicious that I was a fraudster, but the last reply from the ticket officer made a perfect conclusion. While I thought he would win this little battle by showing that at least one door was opened, he lost with for his last defense: "¡aqui esta abierto porque estoy yo ocupado a discutir con usted!"