The French director Alain Resnais died yesterday. Initially only an editor, he kept in his movies a peculiar attention to the style. This led him to pursue the pure aesthetics of a perfect sequencing of the sounds and the images. As a Frenchman, I first met his work at school through the documentary Nuit et brouillard on the Nazi concentration camps, released 10 years after the end of WWII and projected in history class. I remember the odd feeling that one has also in other movies from Resnais, of art, narration and montage taking over the story itself.

Then there is L'année dernière à Marienbad (Last Year at Marienbad), typical of the Author, a recognized masterpiece, inadvertently influencing Inception from Christopher Nolan~[1], which interested us in particular for some scenes being shot at the Schleissheim Palace, nearby Garching, where we often went for a walk and some inspiration. 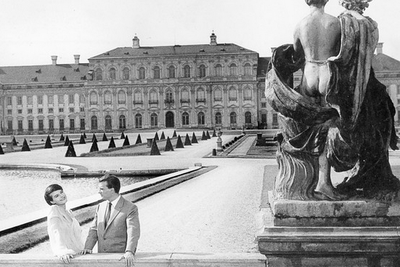 The work from Resnais is not always easily accessible, when true to his style, but clearly of high artistic value and always interesting (I have seen On connaît la chanson, which concept I found brilliant but the actual realization not that good).

In memory of his passing away, we will visualize tonight one of his work. I am hesitating between another great classic, Hiroshima mon amour, his first feature film or at the other extreme, his last one, Aimer, boire et chanter.

The choice between these two is motivated by the symbol of what does first and what one does last, but his other movies offer other works of interest, that we have put in our list of movies to see. Meanwhile, for tonight, we settled for the first one, relating a one-day love story with the bomb in background.