Wit now and then, struck smartly, shows a spark. 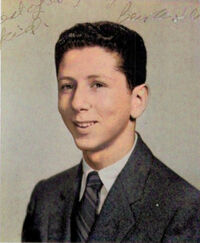 Benjamin Mollow is a theoretical physicist, known for the eponymous triplet observed in the strong-driving regime of resonance fluorescence. Since this object (the Mollow triplet) is one of the most fascinating quantum-optical systems that we know of—the drosophila of quantum optics as well as a treasure trove of results, such as leapfrog processes—we naturally have much deference for his father, who was the first to derive its spectral shape exactly, in a fight against the Rochester school.

The character also looks very interesting. Comments from his students at UMass Boston also paint a dramatic picture (e.g., "Beware the days he wears his jogging outfit...he tends to wear no shirt underneath and has the zipper halfway down...") His webpage is a model of conciseness (?!) with his triplet as a profile picture. The latter is notoriously difficult to find. The picture displayed above comes from a colorized version from some heritage website (copy) also adding elements to the legend ("Noted for his wrestling").

According to the Urban Dictionary, "mollow" also means To think or dwell on something until it is no longer possible to think about it. (!?) 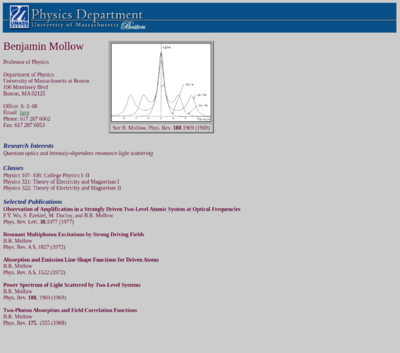