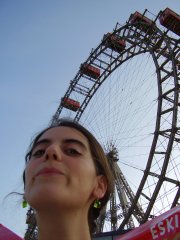 I like working with children and teenagers, I've been doing so all summers during my degree in Spanish and English summer camps. I've also travelled several times to England (London, Hastings, Cardiff, Edinburgh) as a group leader with Spanish kids.

I am very interested in value education and non-violent conflict management. I have a graduate diploma in "Mediacion social intercultural" of the Universidad Autónoma de Madrid.

I belonged for four years to the ICMM Choir. Every year we gave a few concerts in Christmas and June. You can download [favourite-things/music/index.php some videos I recorded].

I've also studied piano and solfa since I was nine but now I'm very keen on singing. The soprano and pianist Cecilia Di Marco was my teacher in Partichela music school (Tres Cantos) in 2007/2008. We [favourite-things/music/index.php sang together] a few times, including my wedding!

When I arrived in Southampton (Autoum 2008), I had the pleasure of joining the rehearsals of Lauda Choir in Romsey, conducted by Adrian Taylor. They are a small chamber choir but incredibly good!

Right now all I mean to point out is that music has its own meanings, right there for you to feel inside the music; and you don't need any stories or pictures to tell what it means. If you like music at all, you'll find out the meanings for yourselves, just by listening. (...) The meaning of music is in the music, and nowhere else.

At Eve's grave: Wheresover she was, there was Eden.

Another real passion I have, is quotations. I collect them in notebooks since I was ten and enjoy hanging them (even literally) everywhere. Part of my opinion about a book is shown by the quotations I extracted from it.