The holy week is a big business in Spain. Not so much in Madrid, comparatively, but since it is the capital, it still offers orders of magnitude more than one has time to go through. We had the tiniest interaction with the Semana Santa, and as these recollections will show, this was already too much even for a blog post.

The Good Friday (Viernes Santo) was great with emotions and excitement for us. Just back from Roma where we had visited the Boxer of Quirinal, but otherwise spent most of the time working, we were eager to do something fun during what is, at least in Spain, an holiday break. It went beyond our expectations. While toying with panoramas, we accidentally shut ourselves on the roof (Elena closing the door-window let it fall in an improbable way that resulted in an impossible move of the lock that closed itself). We had no phone with us, and after five minutes stupidly jerking the window, we accepted we wouldn't make it back from the way we got out: through the door. The most obvious option was to signal people, but then what? I had my keys (in the pocket), so Elena was waiting for a neighbor to pop up so that we can throw him the keys and he could come to deliver us. Needless to say, this was hopeless. Not only shouting complicated instructions to someone who will likely be a tourist foreigner was already futile, the whole operation of throwing the keys could only make things worse. We found the solution all right. As best things have to come last and this is both a long and another story, we'll keep the unraveling for the closing of this blog series, which is full of tension, surprises and has a happy ending.

Even more exciting was the Holy Week in Madrid. In all these chaotic years going round the globe, we only had one Spanish Semana Santa, in our visit of the north of Spain in March 2008. Best celebrations of this type are, of course, in the South. In the capital, being the cultural center as well as all the rest, there is still an outstanding agenda that celebrates all the key steps of the Passion of Christ. We had a privilege vantage point to see three of the six Processions on the day of Crucifixion. Four passed by the Plaza Mayor, one was not visible as it cornered one of the few dead angle:

It is definitely infinitely better from above. We shot two timelapses and also a normal video, which we assembled in one movie recollection, that turned out our tenth entry on YouTube.

There were four processions and you see in the video three resumed in less than five minutes. The last two are consecutive and the last one is shown in lapsed and in real time.

The crossing of the diagonal takes about an hour in full. A fourth procession exited by the Calle del Sal for the same entry by the Calle de Ciudad Rodrigo, which means for those who know well the square that it was hardly visible from our vantage point. I had to actually step down from the sky and join the little people, finding myself quite unable to penetrate the thick barrier of them and only caught a glimpse of a statue of Christ waddling by the window of an old woman draped in her bathrobe like Pontius Pilate and looking down at him with an expression that all this was a personal reproach for her own displeasure only. I have no doubt she washed her hands and teeth off the bathroom sink right afterward.

Missing here is the actual sounds of the processions. Deep and heavy drums, trumpets, flutes and the clamor of the crowd, their shouts, their whistles, their clapping and singing, their mere breathing all exhaled profusely from the Plaza to be lost in the sky and later in the night. We found that the Croatian duo 2Cellos had a style that could give a hint of how this mixing of the holy and the popular, of the dawn of an era and of yesterday, sound when it crawls through the streets.﻿

, which was marching for la Procesión de la Soledad, the last procession of the Semana Santa. The procession was with Nuestra Señora de la Soledad (s. XVIII) and the Cristo Yacente (s XX). 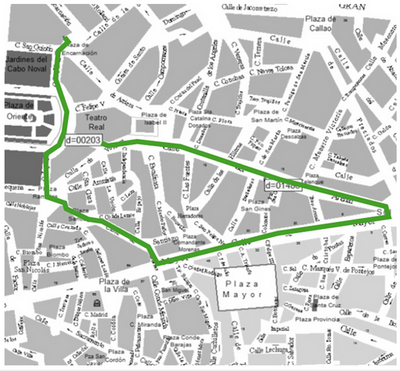 We have attended both the beginning and the end, walking our own way through the Gran Vía, the Plaza de España, the gardens of Sabatini and back to Plaza de Oriente where we caught the ending of the procession. Elena went home and I stayed to witness the closing ceremony. I tried to leave many times as it was very long but the spectacle was too absorbing, the ambiance too gripping and the atmosphere too true sounding. This is a short video of drummers saluting the Virgin on her way out of this year's Procession.

There is something inspiring in the way the same story always repeat, with us, the spectators, lining to witness a story that is more folklore than celebration, under the look of a statue which, even if it has no sight, has the expression. The same public we have been, since the very first such procession, the one that was for real, getting entertainment at a crucifixion on the excuse that it was a legal execution, and now getting entertainment on the excuse that it is a commemoration.

The closing of the Semana Santa was again with the confraternity from Zaragoza, who brought all their tambours and drums and everything but the "capirote", so that we could now confirm which were the women and which were not. The spectacle from the Plaza Mayor is outstanding, with the square becoming a cuboid serving as a resonance box, exhaling deafening harmonies. Spain was, for one hour, the beating heart of the World.