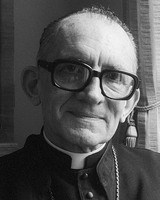 Constantin Virgil Gheorghiu was an Orthodox priest and Romanian writer.

Our interest for him is for his masterpiece, Ora 25, which is one of the earliest depiction of the post-second world war era of dictatorship and societal oppression in the wake of industrialisation and technology. This theme, that we also find in the works of Bernanos, is otherwise little addressed by major authors (it enjoys some popularity in reactionary circles) although it is bound to develop as the problems it pauses will increasingly become more obvious. Since we are used to see technology as a good thing, its use in societies that also present themselves as good (democratic and promoting human rights), is a major political and societal theme.

Gheorghiu wrote other works, that we still need to read and study. A non-comprehensive list of titles to check include:

Note that several evolve around the 25th hour concept, and are all in French (although some have been translated, Gheorghiu was writing in French after Ora 25).