The man who wasn't there

The Man Who Wasn't There is a 2001 neo-noir movie by the Coen brothers.

This is one of the most famous novel opening. One which has a special meaning to me, as I read it to my examiner for the Baccalauréat for my oral of French literature.

You don't have to make a movie out of the book. Visconti did that [1]. I haven't seen the movie, yet, but it's always dubious that a cinema director, even Visconti, can come close to a masterpiece of literature.

You don't have to stick to the story, I mean, if you keep what matters. People's reasoning seems to be along the line of, I liked this novel, therefore I'd like the movie. This is a great mistake, almost systematically, the movie will be an outrage to the novel ("Planet of the Apes" being the only exception I know of a movie that surpasses the book).

In L'Étranger, we have a cold detached character who still feel remotely involved with the course of events unravelling around him. In my reading of the novel, he really is, deep down, a good person, something like a philanthropic psychopath. It's a universal theme. Somehow it has to be explored beyond the novel.

In Coen's movie The man who wasn't there, you have the moving picture version of such a character. Billy Bob Thornton makes an astounding performance, portraying Meursault much more convincingly as a cheated laconic American barber trapped in an empty and pathetic routine than as a French colonialist bereaved from his mother on a post-funeral rampage.

Yeah, I worked in a barbershop, but I never considered myself a barber. I stumbled into it.

In fact, Camus repeatedly said he had no deep philosophical pretensions behind the novel. I believe he really wanted to explore this feeling of going through a chain of events of which you don't feel connected sentimentally, although you realize you fully are, conjecturally. Not being complete monsters, both Meursault and Ed Crane, the Coen barber, express sympathy at times or try to fit in a way. Maybe the most illustrative part of the movie is when the character encounters the flying saucer (in a dream). He just looks for a while, nods, look sideways and goes. That's the absurdity of the human condition. That's why l'Étranger takes philosophical proportions. Life consists in being around and witnessing things happening, trivial or deeply unsettling, they are all equally absurd.

The movie succeeds splendidly as it captures this situation, perfectly rendered (by an otherwise little known actor). The story is original, which makes for nice twists in the plot. It is set in black and white to weight on the atmosphere, with success. And as typical of the Coen brothers, there are a multitude of little scenes, not crucial for the development of the story itself, which are classic episodes in themselves, such as the visit in prison or the assessment of the piano teacher.

It's not a dramatization of l'Étranger but explores with equal success similar thematics, on a story of its own. A must see. 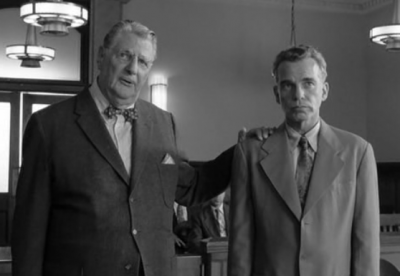