Paris, the capital of France. 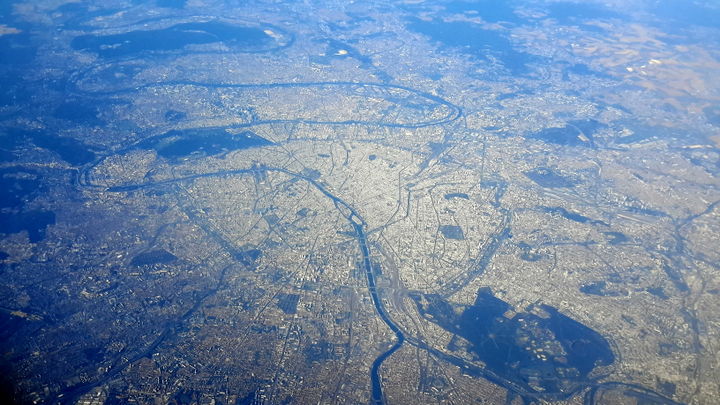 I had a very mild version of Paris syndrome (see here for a better description). Interestingly, not the very first time that I went there—this was with my father—but I believe on the third visit. The city suddenly appeared gross to me, dirty, full of obnoxious and arrogant people. A deep, complete, total disappointment of this place and its people. I can certainly understand it reaches traumatic proportions for delicate foreign visitors.

Although it is not, by far, our favorite European city, it remains one of the most important ones.

There are plenty of beautiful tributes to Paris. My favourite is of course Brel's les prénoms de Paris:

Most tributes to Paris are tributes to love. Some, equally beautiful, are to freedom and resistance, but in the sight of history, these are farcical. Maybe more believable are those to a realism à la Zola.

We never go to Paris without passing by Notre-Dame, the heart of France and one pillar of Catholicism, where the Crown of thorns has been placed by Saint Louis for safekeeping while the Sainte Chapelle was being built (as he died before, it seems the relics remained in the temporary location). Witness of the slaughtering of the wolves of Paris, defaced by Napoléon for his coronation, the resonance chamber for the Requiem of the last French leader, and, of course, the inspiration for a major work of French literature, it is the real symbol of our capital.

A rather odd-looking church to crown Paris, it was built under Mac-Mahon following the popular uprising of la commune to reestablish moral order and monarchy. It is difficult to put it one side or the other: Kitsch or architectural masterpiece, perpetual adoration or touristic trap, national penance or national sin.

The magnificient Opéra house which should be known as the Opéra de Paris but is so opulently designed that it is known after its architect instead, Charles Garnier, an unknown 35-year-old architect when he was entrusted with the work. The construction, from 1860 to 1875, was interrupted by numerous incidents, including the 1870 war, the fall of the Empire and the Commune.

The famous copy in bronze of the the Trajan Column (itself in Marble) in Rome to serve as a pedestal to Napoléon who erected it from the cannons captured to the combined armies of Europe.

Sadly, the statue remained that of Napoléon as a Roman emperor, instead of the iconic pause en petit caporal, with the bicorne and in grey-coat with hand-in-waistcoat, which would have been much more dramatic.

Vincent de Paul was a middle-age priest whose life was up to the greatest Biblical sagas, like that of Joseph. From peasants parents who sold their oxen to afford him an education, he was taken captive by Barbary pirates who auctioned him as a slave in Tunis. Later chaplain to the galleys, he led an order (the Vincentians) vowed to poverty and chastity and devoted to the poor in smaller towns and villages, making de Paul the apostle of charity. The Church in its name, built after the model of Roman basilicas, retains an original architecture, particularly due to the two towers. It is the latest major classical church of Paris.