Luton is a town in Bedfordshire, England, located 51 km north of London, with ~185000 inhabitants. The city hosts a London airport (Luton Airport) that is one of the main access (through easyjet) to UK from France and vice-versa, so that people usually go to Luton, possibly a lot, without stopping by. We did spend one night there on 1 October (2006).

There are two main museums in Luton associated to the two parks. 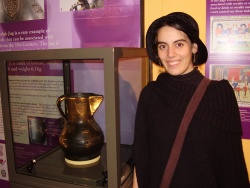 It features mainly local history with few middle-age possession. The Wenlok Jug is the central piece: a big jug of about 7 liters contenance and more than 500 years old. It was used on Royal occasions to serve the King with wine. It was actually made in Norfolk, but was owned by John Wenlock who lived at Someries close to Luton. Paid £750,000 (300 times the annual budget of the museum) to prevent the jug be acquired by the New York’s metropolitan museum, it is on display since May (2006). Decorated with coats of arms, including the royal arms used between 1340 and 1405, the jug bears the inscription My Lord Wenlock. The jug was robbed and later recovered in May (2012).

On the day we visited, there was an exhibition on games that have been played throughout the world since ancient times: the Roman game Duodecim Scripta, Senet from Egypt, Snakes and Ladders from India and others. The highlight was a number of the Lewis Chessman. Luton's own ancient chess piece found at Harlington, dating from 900AD, is probably part of their permanent collection.

We did not have time for the other museum, the Stockwood Park Museum. Even a small place such as Luton, and some would say, not a very interesting one~[1], was too much for us to cover in one day.