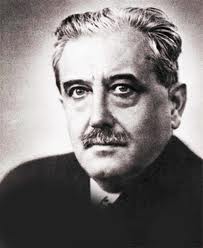 Bernanos was a French writer and essayist, a witness in the sense of Gheorgiu, a convicted catholic, a leftist nationalist, a right-wing anarchist, he is the greatest contemporary French political thinker who foresaw the biggest challenges of the society of his and the future times, a deeper and less-versed in fiction version of Orwell.