Chicago, the third (was 2nd for a long time) city of the United States of America, in Illinois, is the capital of the American midwest. Sitting by the lake Michigan, one of the great lakes, it is one of the iconic city of the united states, plentiful in skyscrapers and exhaling a stronger American atmosphere than the other great city that we visited: San Francisco.

In late August (2014) after the ICPS in Austin, Texas, with Carlos Sánchez and Blanca Silva. These are some pictures from this trip:

There are various world class attractions in Chicago: the Art Institute of Chicago, the Shedd Aquarium, the Adler Planetarium... We decided to visit the Field museum of Natural History, which features the biggest and most complete Tyrannosaurus Rex skeleton. Although it tackles all of natural history and beyond, it can be seen as a tribute to the theory of evolution, walking you along an impressively reconstructed Phylogenetic tree of earth. It also hosts a copy of lucy (original is in Ethiopia, although not in display either).

Elena, Carlos and Blanca saying Hi! from the DuSable Bridge. 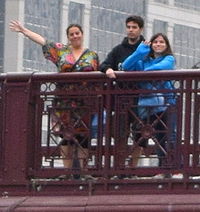