On the coming French 2017 presidential election

In the French presidential debate [2], where the liberal discourse was confronting the nationalistic one, but which everybody agrees was of terrible quality, full of unwarranted aggressiveness, insults, belittling of the other, etc., the pathetic Marine Le Pen had one good rhetorical line: "whoever wins the election, a woman will govern France, either me or Mrs. Merkel" (?!).

In the midst of her otherwise deplorable performance, this was an effective figure of speech to illustrate clearly her main political stance, which is that France lost its auto-determination and sovereignty that got diluted into a new entity, whose control (because someone has control) is for now with the strongest economical power in Europe: Germany. But this is not the point that interests me now. What interests me is another statement along the same idea, that we, as the public, can make. It says: "whoever wins the election, fascism will govern France".

Because, allegedly, Le Pen is a fascist, at least if we give some credit to just about everybody's perception, with calls to "save democracy" and the "republics" from the very great majority of political actors, including foreign ones as Obama or Merkel, of the media (also including foreign ones), of public figures (idem), religious institutions (except the catholic church that did not express an opinion) down to many people in the street and many (though less) on social media. Given the background of the Le Pen party, far-right and with a consistent strong anti-immigration and nationalistic policies, the qualification is maybe not completely libellous. However, the weight of the accusation and the danger that is associated to it is at a point where it seems the party should be dissolved, its leaders put in jail and no pretence be made of an election going on. It is at a stage, if you are a public figure, where not giving your explicit support for Macron against Le Pen is being considered as expressing support for the latter and engaging your "responsibility" (we should surely understand there will be consequences), even when this concerns those that have always been direct and fierce opponents, such as Mélenchon.

But even more surely than Le Pen, Macron is also a fascist. And as always, something is more dangerous when one is not perceptive of its existence. Macron is the violence of finance and of the free-market, with no regulations whatsoever. Macron's neo-liberal policies will lead France straight into the American type of society, where you get shot in the street by the police while on your knees with your hands raised up, or brutalised by the same police for driving your wife to the hospital for labour and taking a couple of minutes with 911 to figure out how to best proceed, or, in a series of recent "incidents" with airplane companies, for not following unjust and arbitrary last minute orders of expulsion, being denied a service for which you paid just because someone else that the company deems is more important (like its own employees) needs it and have you sent away like the annoyance you are. The police comes (call that "airport security" or whatever) and breaks your nose.

The last such example of this type of society where cash counts more than people and economical factors rule the people in charge of making decisions, is the ejection from a plane of a couple—Brittany and Brian Schear—whose baby's seat, booked and paid by the family, was required for one of the company's several overbooked customers. The logic is that it's a baby, so it's small and looks like it can be moved around to fit in some overbooking and lower the financial blow of a fluctuation in turns-up, so please vacate the seat. Not even your refusal but your failure of immediately complying, will have you thrown away. That's the baby they asked to be moved away, if you're not thinking in terms of money but in terms of a defenceless, fragile humane being: 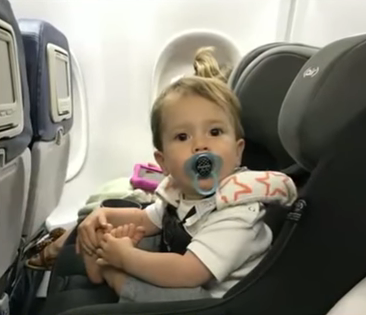 The fascism, that is, the brutal use of force and violence with no concerns for personal freedoms and dignity to enforce the will of some higher authority, comes in full view with the threat this poor family received: that they are committing a federal offence by refusing to blindly follow orders and will go to jail and have their children placed in foster care. Here you have it. The family did not get to the point of being forcibly removed and be physically injured (that would have happened for sure) and left the plane, with nowhere to go in the middle of the night, with two children and a nifty $2000 expense to get the next plane home.

There is one point to mention, which has no importance on the story but illustrates something else: they bought the ticket for their eldest child who finally took another plane, so as to, they say, free the seat for the baby. Here we have Gheorghiu's Ora 25 main theme: the technical slave, the person who lives in this society of machines, where cold logic takes over common sense: "there's a glitch, however futile, that allows us to kick you out with your two children in the middle of the night? Out you go." On the video of the incident, it is interesting to see how other technical slaves (the neighbours) are detached from what is going on, only waiting for things to get settled in any way that is fine with the police and go back to their home and business. That is Gheorghiu's insight. We are not humane anymore. Only witnesses. We don't care about others. Whereas people used to go to great depth of pain to help someone from another village, now you can't be bothered by a family with two children be kicked off your plane. You're just looking as part of the public.

So that is fascism to me, not that of the military or the church, but an equally harmful one, that of money, the fascism of a society that is ruled by economical factors, by the benefits of its private investors, by bankers (Macron is a banker). Another trademark of fascism is its direct clash with knowledge, understanding and culture in general, with, as its most famous illustration, the Nazi quote "When I hear the word culture, I reach for my gun". French people will elect on Sunday someone who stated that "there is no French culture"" (?!). When you've reached this point, you've flushed Bernanos down the gutter and you're ready to kick off babies who stand on the way, just like they do in the United States. There is no France against the robots anymore, there is only a global, seamless set of new values: those of money.

I'm not too sure the main problem with Le Pen is that she is a fascist, but taking this as a the greatest evil and assuming that she is, then there will be no saving us from that on Sunday. France will start its resolute march towards fascism. The one that feeds on money being more likely than the one that feeds on political authority. Which is worst? I will conclude by quoting our now lost and forgotten Bernanos, from the essay already alluded to that address precisely these questions (?!):

This requires no translation, because this belongs to something that does not exist anymore anyway.