Wasserburg and Haag in Oberbayern

A one-night campervaning trip in Bavaria, on 30-31 July (2022), while the Alps were under electric storms, visiting towns of upper Bavaria.

Wasserburg am Inn is a peninsula almost completely enclosed by the river (Inn), a medieval city with walls, for which the river acts as a sort of moat protecting a castle, hence the name of Wasserburg: "Water Castle". It is one of the oldest towns in Bavaria, possibly older even than München. Unfortunately, we did not push our round walk by the Inn till the Brucktor (old door on the Inn bridge).

There is an interesting Wasserburg Historical Encyclopedia.

Haag in Oberbayern counts with a beautiful and iconic castle (the Haag castle) with a large tower with four oriels, that one can admire from large distances. It also has a brewery that produces a delicious brand of Weissbier (the Unertl). The castle was closed on this day (Sunday) as was pretty much everything else. I don't remember that we even crossed someone in the streets.

On our way back home, we had lunch in Stauden, at the Gasthaus Maier (great place) where we could taste the Unertl with a view of the very castle engraved on the glass. We then bathed in the river Isen after failing to visit the Schloss in Burgrain, which is private property. In still another place on the road, Außerbittlbach, going round its church (Saint Stephanus), we found an interesting tomb honoring soldiers from the last two wars, one in outfits that would probably be hidden or censored nowadays. The expression on their face, although of the same family, was strikingly different. 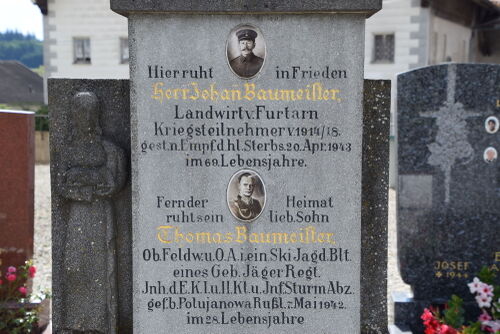