I believe in people. I feel, love, need and respect people above all else [...] One human figure on the slope of a mountain can make the whole mountain disappear for me.
Leonard Bernstein

The Little People is a series of short movies I made to explore various aspects of the dynamics of people in the Plaza Mayor of Madrid, as seen from our vantage point on the very rooftop. Mainly, this consists in fast-forwarding time (timelapse) to be able to see, and see over again, what every little figure is up to.

Then you get a hint of this wonderful feeling explained by Phil to Rita [1]:

or maybe the real God uses tricks,
you know maybe he's not omnipotent, he's just been around so long,
he knows everything.

Man gets easily bored. No one's life is so disinterested of itself to fully give its own time to the contemplation of others if it must take more than a couple of minutes. But thanks to technology, it is now possible to push the fast forward button. It is not boring anymore to peek at people moving at ten times their normal speed, as their motives reveal themselves and some sense is given to their otherwise meaningless motion, rendered chaotic by its slowness. Even if you witness some meaningful act, you have forgotten its connection to the next one in the agonizing boredom of waiting for it. But once they are sped up, you now see them all connected, you understand their trajectories, their meeting, their joining for a coffee, getting back together or not, colliding in strange ways with other clutters of people, interact in ways that were unsuspected at the pace of normal life. When you repeat the experience, you get acquainted to other little people you did not pay attention to previously until you get familiar with the whole play: you can understand and internalize most of what happened on a square in an entire morning. 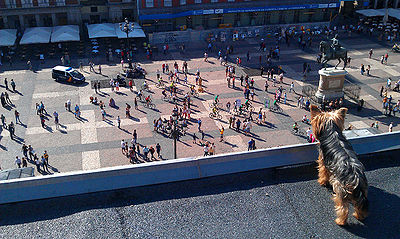 There is, in addition, a pleasant "Trumpton effect" of stop motion of little people (see [2], thanks to Kevin Clift for pointing this out), which makes it cute in addition of interesting.

Although the procedure is nothing very complicated, it took me time to get to a point where the result produces what is just described above. I list below preliminary attempts that I uploaded to YouTube in their chronological order, so roughly, technically sharper ones lie near the end. The really good ones are still to come: