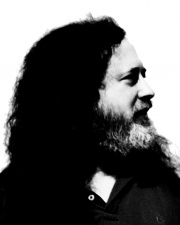 Stallman is a great computer scientist, father of Emacs and of the GNU project, among others. He only misses being the father of linux so that the legend be complete, although technically, he is a bit that as well [1].

He is also a freedom activist. He founded the Free Software Foundation that promotes the freedom to create, distribute and modify computer code.

He is a major thinker of our time, who concludes that a free society (free in the sense of freedom) is not only possible, it is also better.