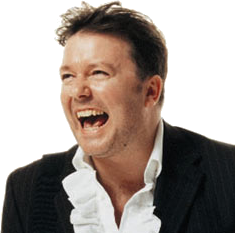 Ricky Gervais is is an English comedian that I'd best describe as a "comic intellectual", prolific as an author and actor. He is a dedicated and thought provoking artist

The trademark of genius is revealing obvious truths, the sort of which are so clear that nobody sees them.

Here's an example. Whenever I'm presented with the game "whose celebrity/historical figure would you like to know personally" (whatever the relationship is discussed), I argue I already know the best people personally, which make me look pretentious and/or stupid. My argumentation is along the line of "I'm simply not knowing all of them" and emphasizing how much more special is something that exists and was built as opposed to supposed qualities projected onto an idealised (albeit famous) stranger. What I'm trying to explain, sometimes over lengthy conversations, is what Gervais summarizes neatly in two sentences:

The funniest person you know isn't a comedian. He's a friend of yours or a family member, because of the absolute wealth of input you have together, the two-way connection.

Whenever I hear someone in TV or a comedian called a "genius," I think, Medicine lost another one.

He also has this combination of intellectual honesty, courage and not-minding what other people's think that allows him to go directly to the truth jumping over the politically correct: on a William Hurt's quotation—acting can bring you closer to yourself and help you understand other people.—the sort of deep empty truth, he adds: It's also easy and pays well :) [1]. He also captured, to my delight, the reason why I try to look after myself, maybe not the only one, but definitely the most important:

I have a gym in my house. The thing is, though, I'm only trying to live longer so I can eat more cheese and drink more wine.

He is an animal lover, which makes him comment or discuss this central aspect of our existence. When a tasteless woman with a passion for murdering wildlife exposed herself with a lion she shot~[2], Ricky could elegantly gather the violent disgust and outrage of the internet in only three words, staying a gentleman while not concealing a direct opinion~[3]:

"When a incredible day in South Africa! Stalked this male lion...what a hunt!" spot the typo.

This exchange on Twitter [4] could be the illustration of what black humor is:

Listening to Gervais is like breathing fresh air... he's not the funniest person I know, but he's in the top list among the famous ones.

The last tweets from Ricky