There are no good restaurants in Wolverhampton itself. We still compile below a list of the not-too-bad ones (in rough order of preferences), which do perform okay. There are plenty of very bad ones, though. At one Italian where we once ordered a risotto with Camilo, we've been asked if we wanted fries with that. It was a bit of a shock.

Jivan's is top in our favourites as an authentic, straightforward, cheap but still tasty Indian food. We go there for many occasions, ranging from celebrations to inviting University guests and/or colleagues or for some impromptu dinners. It opens till late and always has sittings available. Sadly the quality is sometimes unequal, ranging between great and average, so still fine. The spiciness, in particular, is a recurring mystery, as you can request Madras spicy food which is fairly mild or non-spicy that comes out impossible to taste. We just agreed that it's basically random, with possibly some weak correlations with what you ordered. It's a nice place, with a rather charming—again, authentic—interior, but it making the top place of our list shows how modest is the general offer in Wolverhampton.

The one in Stafford street. We go often (Julia loves sushi) so the owner, who's been seeing us since about the time she opened the business, knows us well. Quality of the raw food is great, I don't know where they get it from, although it's pricey and you typically still are hungry after your sashimis, even if you include some teriyakis in the menu. They have an all-you-can-eat option but then the service becomes very slow as they try to regulate what you get and the experience is then no agreeable (as you have to spend a long time to wait for the dish, and eat them quickly for the next round in the time limit they give you)

This would be the posh-restaurant of Wolverhampton, except that it does not seem to have enough of a market for such a service, so the restaurant has to adapt to the demand which comes at the price of the quality, although also the appearance is maintained through the pricing (with some tricks such as offering discounts of various kinds). We go there on semi-formal occasions, never expecting too much, but there is at least some effort in the presentation, service and general decorum. Neighbours would typically look on their best dressing, even if many tables have house wine. Still fine to go from time to time. Enough, apparently, that the manager also remembers us and makes comments on how Julia evolved since last time (we go there since she's been a baby).

Nice "bistro", that would be ideal for lunch, although they get very slow. Also it's very small with tiny opening windows of operation. The not straightforward things (like paninis), which is basically their catch of the day, can be a bit pricy for the experience. The cuisine is average. The atmosphere is nice (nicer than the food).

The Rocco Restaurant is to Italian food what the Hamilton is to fine dining. There's an attempt, and to some extent, a partial success, at being that, but you're clearly dealing with something else. Still, the manager is a real Italian, very cordial, with great attention to the customer. English staff that is hired on the other hand is basically clueless and looks out of place. Food is Italian inspired but cooked the British way.

An okay Chinese restaurant, with Chinese staff, most of it seems to come directly from China and not speak any English at all. Some place you can go to, although that doesn't count as a recommendation either.

The only Michelin-guide mention in Wolverhampton (in the "plate" category, which means "Fresh ingredients, capably prepared: simply a good meal") so the one restaurant you'd expect at the top. We went there several times. Service is actually rather poor (not precisely systematically rude but systematically careless and disagreeable, for instance, it is common for a manager of some sort to complain to the waiter directly at your table and you can often feel the annoyance you're causing to the staff by your mere presence). They are the types of people who would aggress customers on reviewing sites (!?). Food is on the okay side but nothing fantastic. We typically get a much better experience in the unassuming Jivan's which comes at a small fraction of the price. This is what Michelin would tell you instead: [1]

This smart contemporary restaurant is well-established and has several generations of the same family involved. Appealing, original menus offer South Indian and Bangladeshi dishes, crafted only from local and homemade produce.

When you see that this is in the same category than Opheem in Birmingham, the verdict is: considerably over-valued. Maybe it was this at some point, and they got spoilt by their special Michelin status (which is undeserved). 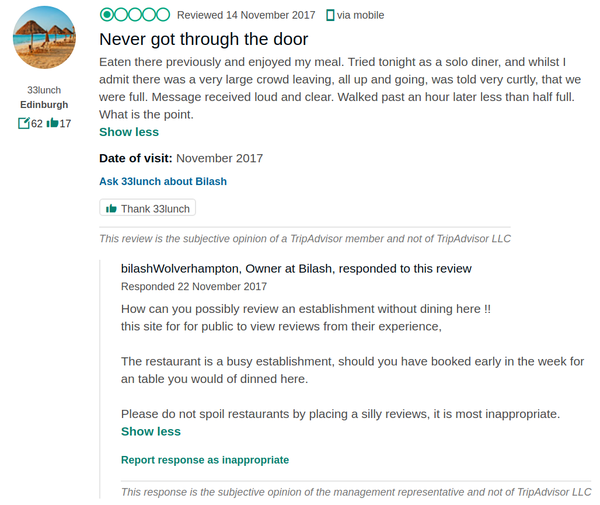 Lists from other platforms: