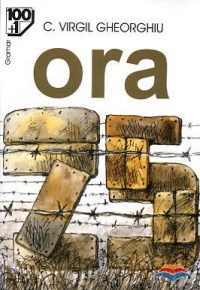 Ora 25 is the original (Romanian) title for Virgil Gheorghiu's masterpiece, the twenty-fifth hour, of which the author commented in his memoir (that he wrote in French):

This remark may have its importance due to some other highly decried texts and obnoxious statements. His Œuvre Capitale is, however, powerful enough to indeed eclipse everything else. The title of the book from which the quotation is extracted reads, interestingly, "Mémoires: Le témoin de la vingt-cinquième heure." (en) (Plon, 1986). In Ora 25, Traian—the novelist who defines the twenty-fifth hour concept—later becomes "the Witness", the status of the observer who lost the dignity of the writer and is reduced to the purest expression of existence and experience.

This is the power of this novel: it introduces many important concepts of our modern society that remain of burning actuality. "The Witness" is one of them, a major one, as this is what we became.

The main concept is that of the "technical slave". In 1949, Gheorghiu already understood the impact technology has in society, namely, to dehumanize it, to make people behave to each others like cold, detached, feeling-less machines.

Anybody who had to ask a favour to someone in a village knows that they will find a serviceable fellow man. On the other hand, it is a common if not a systematic experience that the interaction with someone in our modern society will exert antipathy, animosity, indifference and other mixed feelings in a combination that ranges from disinterest to enmity, as we experience daily when we buy a ticket or a drink at a counter, get into a taxi or have to address a bus driver, order food or deal for whatever reason with others in the streets or at any place where people are but a punctual figment of society that touches us like a needle. We are all technical slaves.

Gheorghiu defines the "citizen" as this half-man, half-machine who has the cold detachment of the machine and the cruelty of the man. Many of us are citizens, who value more society, law and order, rules, dogmas, prevailing thinking, authority, prejudice, security, comfort or anything else than the human beings we find in front of us, who should overrule everything but that we toss away, gently or violently. In the novel, various administrations, all blind, cold and stupid, illustrate this concept by enforcing senseless and atrocious rules against manifestly innocent people. It is a fair bet to say that we have all been victims of some administration or of big companies. The severity of the injustice can vary, but as is illustrated magisterially in this novel, it is prone to be boundless and in difficult times the injustice can quickly spiral into torture, slavery and summary execution. It is in this way that a prominent and refined lady suddenly finds herself peeing all over herself in jail or that a pacific priest preaching love and speaking against violence ends up in a mass grave after rottening for months in a camp, amputated of his both legs. These are two of the softest victims one encounters in the novel.

Another concept in the wake of the previous one is that of classes or categories. The technical society needs to classify, it cannot deal with each individual for what it is, a unique case. In the context of the novel, the main category is that of the "enemies of the state", a rather vague notion that can accommodate everybody. It might be the most recognizable pattern of the novel that Iohann Moritz, the main character, drifts from one broad, ill-defined class to another, always finding himself on the wrong side: a Jew during the pogroms, a Romanian spy in Hungary after he escaped from a camp, a voluntary Hungarian worker in Germany at the peak of the war effort, a German Aryan enrolled in the SS when the Americans occupy Germany... In this long journey of thirteen years, he had never been a proper member of any of these classes, but was put there by a blind, unconcerned technical society which treated him as such. Instead of offering support and empathy to a suffering human being—for the need of the novel, immaculately innocent—the world unleashes sadistic and absurdly cruel torments on an angelic person whose only business was to work his farm to feed his family.

More important in this concept of categories than a defining attribute, either intrinsically biased or completely accurate, is the automatic and perfunctory treatment that is legitimated by their mere existence. It becomes legitimate to detain someone on the mere grounds that they belong to an enemy nation, regardless of their actual records and history. While we are all technical slaves and most of us are citizens—being on both sides of the whip—only a few seem to have remained true to what transcends all the categories: the human being.

Iohann Moritz is the most human being of all. According to Traian, he is the last human being in the twenty-fifth hour. Moritz exemplifies all the human values. He sacrifices himself for others, he empathizes, he pardons and understands, he suffers and accommodates himself in a society that oppresses him. Being the archetypal human being, he is also, for that reason, the gruesomest victim of all.

Another important concept is that of the universality of evil, a courageous theme in 1949 and one still of actuality. Moritz suffers both from antisemitism than from the American discrimination against the vanquished nations. An individual always finds himself alone against the technical society and the state, even—and even more so—when the said state trumpets freedom, democratic values and human rights.

The twenty-fifth hour is a poetic notion of the state of things when they went so far that no comeback is possible. It is a beautiful image for an important and recurrent theme. It is an entire hour, which climax in atrocity only becomes fully apparent in the last of its minutes, making the first of them particularly terrifying for those who comprehend and accept the idea. I often wonder whether Occident and/or Europe have entered in their twenty-fifth hour.