La Estrategia del Caracol is a 1993 Colombian movie, a classic of their national cinema.

As most masterpieces that do not fall in the Hollywood sphere of influence, the work require some effort of immersion into a truly foreign culture, into the life of people, of a society, that is not that formatted by our own or by the American one. This movie is to the life of the Bogotanos what "Mon Oncle Antoine" is to the life of rural Quebec or "Tokyo Story"" is to Japanese society. It brings you somewhere you may have never been before, with the discomfort of every unfamiliar places and atmosphere, but once you have arrived, you have found a new home.

Warning: Spoilers, read no further if you would prefer to discover the revealed bits by yourself.

People face eviction from their neighborhood in La Candelaria. They try various tricks to merely delay the unavoidable expulsion, carried out with strict administrative adherence to the procedure. This gives us memorable scenes where, surrounded by the judge, by the police, by the lawyers and all the many other interested parties, we see the frail clerk who, on his little table symbolic of law and order, transcribes from the very street—symbolic of the reality—which legal steps are to be taken, which are the options, list the obstacles, writes down the insults, that escalate into incidents, leading to police charges, culminating once with a dead child. Such scenes repeat constantly, they are the backbone of the plot and illustrate how the lawful force and the public order that arose from the People, is used against them, once these institution somehow got out of hand.

Indeed, while ultimately legitimate, the eviction is done for the benefit of a rich landlord, using corrupted intermediaries and our sympathy naturally goes with the oppressed tenants. As the little people realize they will eventually be put out, they decide on a strategy. As they need time to arrange it, they agree to vacate "by Friday", even offering to leave the house painted when they're gone. 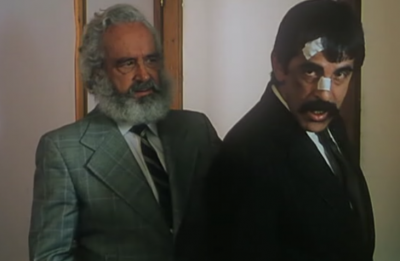 Setting the punchline of the movie on its pedestal: "Hasta el viernes. Hasta el viernes, y le entragamos la casa pintada." Don Jacinto and 'Perro' Romero promise that if allowed till Friday, they will return the house "painted". They impersonate the virtues of the People, striking back with pride and panache.

The strategy is that they will leave indeed but will bring the house with them. The promised painted house is a literally painted facsimile of the building that they have relocated by moving it bits by bits.

The major theme of the movie is dignity, as the move wins them rather little: they lost the privileged location in the heart of the capital and find themselves in an even more illegal situation than before. Also of interest are the interactions, not always the struggle, between the various strata of the Colombian society. Don Jacinto and Romero, pictured above, are the two main figures, incarnating respectively the resourceful and the law-abiding spirits of the people. Various shots of Bogotá and the play of each and almost every actor make it a great insight into Colombia. Delightful situations are to be found in insignificant, secondary scenes. I like when the judge smiles at the Japanese serving him food, one of these moments that look out of the story but that convey something genuine of the Colombians, truly palpable to the rude and/or fake Europeans; or when Gabriel reveals himself as a man in pure Bogotan slang: "No soy ninguna vieja".

Interestingly, the inspiration for the movie came from a real story of an eviction that was delayed so much that when the justice could take its final course of action, the house no longer existed. Beyond that, the movie in itself elaborates on a fantasy most have certainly toyed with, popularly dramatized in the animated movie Up: to carry away to a different physical location far from the problems zone, one's house, one's desktop, one's street, one's favourite place or mountain or bridge or anything made of stones and wood or of whatever that constitutes our every day, and that we'd wish to keep being so in a future that wants us someplace else.

Another exceptional feature is the original music from Germán Arrieta (see also~[1]), an extract of which is reproduced here:

Unlike the story itself which, to a non Latin American, could appear slow, or taking strange and/or secondary routes, with detours in the plot that are subtle or impossible to understand (such as, what are they fiddling about with the mirrors and the kaleidoscope?), the soundtrack is an instant, universal love. Its rhythm and theme make it the best vector of expression of all the emotions that animate this improbable and heroic strategy.